If you count yourself among the countless people who struggle every day with poor wireless speeds and frequent connection drops, this article is for you.
top choice
Get NetSpot

WiFi monitoring is the act of analyzing wireless networks to see the status, load, traffic, speed, and signal strength of each network.

Before 1985, there was no need for WiFi monitoring software because there was a very little unlicensed wireless spectrum that could be used without the need for a government license. But thanks to a decision taken by the Federal Communications Commission (FCC), three chunks of the wireless spectrum (900 MHz, 2.4 GHz, and 5.8 GHz) opened to communications entrepreneurs, and the rest is history.

Initially, the newly opened wireless spectrum saw very little traffic as nearly all Internet users connected to a wired network. After the release of the first iPhone sparked the mobile revolution that’s still taking place today, millions and millions of new devices suddenly connected to the Internet wirelessly, and the same wireless spectrum that once seemed so vast became cluttered to the point of network congestions.

These days, the situation is so bad, especially in densely populated urban areas, that even regular home users seek the help of WiFi monitoring software to optimize their networks for better performance and greater coverage.

WiFi monitoring is performed using WiFi monitoring tools, which come with a diverse range of capabilities, from device status acquisition to wireless surveillance. WiFi monitoring used to be performed chiefly by trained IT professionals because it required plenty of expert knowledge. However, the situation has changed dramatically during the past few years, and there are now more excellent and easy-to-use WiFi monitoring tools available across all platforms than ever before.

Thanks to modern WiFi monitoring software tools, anyone can quickly check the status of any wireless network and effortlessly determine how to optimize it for better performance. More specifically, modern WiFi monitoring software tools demystify wireless local area network channels, making it instantly obvious which channels are used the most and which see the least amount of traffic.

In North America, WiFi routers have 11 channels on which they are allowed to broadcast. For best performance, users should select a channel that doesn’t overlap with any over-saturated channel. While some routers perform this optimization automatically, most cheaper and older routers don’t.

Paid WiFi network monitoring software is a good choice for IT professionals and those who perform network monitoring on a regular basis. You can expect features such as the ability to perform WiFi site surveys or detect rogue access points. Typically, you also get to enjoy on-demand customer support to help you with any issues you might encounter when using the software.

Besides price, we highly encourage you to look for WiFi monitoring software that is easy to use and features a polished user interface. It’s almost 2022, and there’s simply no excuse for software that provides poor user experience. Features should be readily accessible, and all buttons and options should be self-explanatory, especially when it comes to paid software.

Our favorite WiFi monitoring software is NetSpot. Available for free with some limitations, NetSpot is a professional WiFi monitoring solution and wireless surveillance application with such an accessible user interface that it can be recommended even to inexperienced computer users.

Unlike other WiFi monitoring software products on this list, NetSpot lets users see dead zones, making it easy to find the perfect spot for a router. Besides its ability to visualize signal coverage, NetSpot can also take a quick snapshot of nearby wireless networks and gather all important information about them.

WiFi Analyzer is a simple WiFi monitoring software solution that can be downloaded from the Windows Store for free with in-app purchases. The beauty of WiFi Analyzer lies in the total absence of all non-essential features, making it great for those who don’t expect to perform more than one wireless analysis. 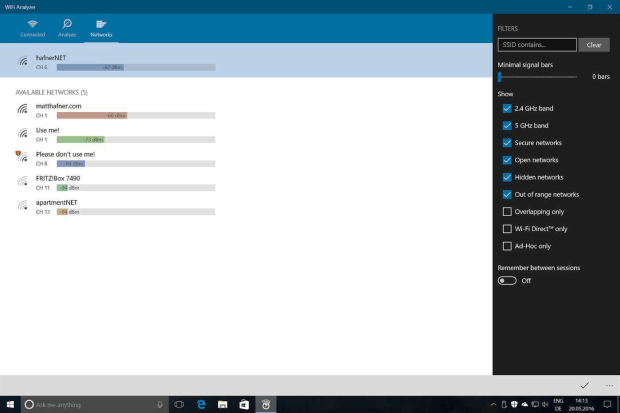 The software can detect nearby wireless networks, gather information about them, and visualize wireless channel usage. WiFi Analyzer is a modern Windows application that runs both on personal computers and mobile devices.

inSSIDer is a comprehensive WiFi monitoring software designed to shed light on the most common WiFi problems. inSSIDer analyzes wireless networks and recommends configuration optimizations based on real data to help users select the right channel and choose the location to ensure maximum performance at all times. Because of the complexity of inSSIDer, we can’t recommend it to inexperienced computer users looking for a way how to easily optimize their home wireless network. 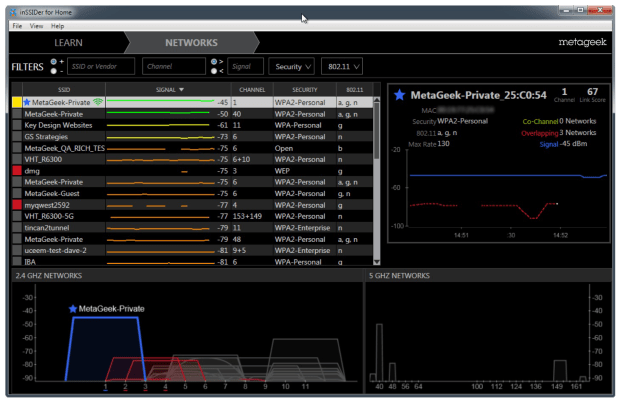 There are many other professional WiFi monitoring software solutions, such as NetSpot, that offer the same or even more comprehensive features as inSSIDer does, but do so in a far more accessible way.

WiFi monitoring is the regular analysis of wireless networks performance for their status, load, traffic, speed, and signal strength. It is performed by means of WiFi monitoring tools.

Most often WiFi monitoring is performed by trained IT professionals. However, there are more and more tools available that are so user-friendly that even people who are new to WiFi analysis can use them and get outstanding results.

There are some important criteria you have to take into consideration when choosing a WiFi monitoring software. E.g. where you are going to use it and how much are you willing to pay for it? For the price you paid, does the software really have features that you will need?

Most high-quality WiFi monitoring software will provide in-depth analysis possibilities for additional payment while offering some basic options for free. Read the software description, and see what you can get with the free version. Also read reviews thoroughly, don't just look at the stars — someone might not have liked the software because it lacks the feature they were looking for, but maybe the feature that you need is actually right there!

What Is the Best WiFi Monitoring Software?

There is a lot to see online — so many solutions will pop up when you search for a WiFi monitoring app. To help you out a bit, we are highlighting three excellent WiFi monitoring solutions:

How can NetSpot help monitor WiFi?

NetSpot offers Discover and Survey modes. Discover mode is free and will help you get the information on surrounding WiFi networks as well as see if there is any channel overlap. This can help you fix some of the latency issues. Survey mode offers an in-depth network analysis with visual depiction of the network's coverage. As a result you can easily fix many common issues with WiFi.

Proceed to consistently monitor your WiFi network for any changes and refer to NetSpot's suggestions on keeping your network's performance top-notch.

If you want to get more information about Wi-Fi, check out the following articles about Wi-Fi routers, the best apps for wireless networking, WiFi signal, etc.
Free WiFi Analyzer App for macOS and Windows PC
Learn more
How To Use NetSpot as a WiFi Manager
Learn more
FREE WiFi channel scanner for Mac OS X & Windows
Learn more
Get NetSpot for Free
Wi-Fi Site Surveys, Analysis, Troubleshooting runs on a MacBook (macOS 10.10+) or any laptop (Windows 7/8/10/11) with a standard 802.11a/b/g/n/ac/ax wireless network adapter.
Get NetSpot