If you have previous experience with WiFi deployment, you’re familiar with at least some of the challenges that one may encounter, such as interference, coverage, and capacity.
top choice
Get NetSpot
Overcoming these and other challenges requires a methodical approach to WiFi deployment that takes into consideration the unique nature of each and every WiFi deployment scenario. By following this WiFi deployment guide, you will be able to build a new network from scratch and satisfy all your requirements regardless of their complexity.

All WiFi deployments can be divided into three basic stages:

Despite not being technical in nature, requirements gathering may be the most difficult part of deploying WiFi networks. When multiple stakeholders are involved, it doesn’t take much for requirements to start conflicting with one another, especially if they are vague.

Make sure to properly document all requirements so you can come back to them later and easily change them if needed. Request a floor plan or create one yourself and gather as much documentation about the building or area that requires WiFi.

With all requirements and supporting documentation gathered, it’s time to come up with the most suitable solution. Some of the most important considerations that need to be made when designing a WiFi network include the size of the physical location, intended use of the WiFi network, expected number of connected devices, building age and construction material, and network performance. 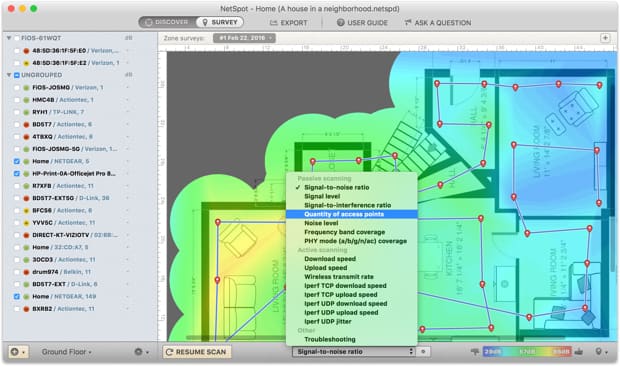 It’s always recommended to conduct a WiFi site survey and create interactive heatmaps with detailed information about all surveyed wireless networks to reliably asset a potential WiFi coverage and plan the solution perfectly.

The deployment of a well-planned WiFi solution should be a relatively straightforward affair. It’s recommended to start all WiFi deployments with a kick-off meeting during which stakeholders review the plan and the project manager assigns objectives.

Deployment progress should be summarized at regular intervals in progress reports to show a comparison between planned and actual elements. In case a problem arises during WiFi deployment, it’s best to schedule a technical interchange meeting to so that the most competent people can solve it as quickly as possible. The deployment should be followed up by a detailed WiFi analysis to confirm that all requirements have been met.

It doesn’t matter if you’re deploying a campus-wide WiFi network intended to provide fast, reliable internet access to thousands of users at the same time or a relatively small office network for just a few dozen of employees — you will always face certain WiFi deployment challenges.

When WiFi was first released to consumers in the 90s, a few people dared to imagine that it would be as widespread as it is today. Now that WiFi networks are everywhere, sharing the same few radio frequencies, which are also used by many other technologies, interference has become a huge issue and a major cause of network slowdowns.

The symptoms of WiFi interference include WiFi connections dropping intermittently, low signal strength even when near a WiFi broadcast device, and the inability to reach the maximum download and upload speed over WiFi.

In densely populated urban areas, WiFi interference is most commonly caused by other WiFi networks and devices. However, they're other wireless devices, such as baby monitors, cordless phones, garage door openers, and even hearing aids may also cause WiFi interference.

To avoid WiFi interference, it’s necessary to discover all nearby WiFi networks and find out which frequencies and channels they broadcast on and which are occupied the least.

This is the most obvious challenge faced by anyone who wants to cover a larger area with a strong WiFi signal. The coverage of a WiFi network is affected by many different variables, such as WiFi router positioning, interference from other devices, the layout of the covered building, and even the building itself.

Different materials block WiFi signals at different rates, with brick and metal being the top disrupters of WiFi signals. A single reinforced concrete wall can cut off users from an otherwise strong WiFi signal, requiring the deployment of an additional WiFi router to make up for the loss.

On the other hand, it’s often undesirable for a WiFi network to cover more than a certain perimeter, so too much coverage can also be a bad thing. Regardless of what your coverage requirements are, you can also use NetSpot to conduct a WiFi site survey to create a WiFi coverage map visualizing the exact coverage of your WiFi network.

Many WiFi deployments place too much emphasis on WiFi network coverage and not enough emphasis on capacity, which can be roughly defined as the maximum number of WiFi devices a network can handle.

Most WiFi routers can theoretically have 255 devices connected to them at the same time, which greatly exceeds the needs of most home users but may not meet the needs of large organizations and enterprise users.

In reality, performance problems typically start occurring a long time before the maximum theoretical limit is reached, so even, let’s say, just 50 people connected to the same router could struggle to reliably access the internet.

Fortunately, capacity problems can usually be solved simply be increasing the density of access points in certain areas. Again, a WiFi site survey can reveal underserved areas and provide the necessary information to remedy the situation.

WiFi deployments don’t have to be a struggle, but it’s important to approach them methodically to overcome all common and not-so-common WiFi deployment challenges. This WiFi deployment guide summarized the individual deployment stages and explained the role a WiFi network analyzer plays in ensuring that each stage ends successfully.

If you want to dive deeper into this Wi-Fi thing, check out the following articles about Wi-Fi security, the best apps for wireless networking, inflight WiFi, etc.
Analyze your WiFi coverage and fix the issues with NetSpot
Learn more
Check the steps to increase your WiFi signal strength
Learn more
What Is WiFi And How Does It Work
Learn more

Get the answers to the most common WiFi questions with NetSpot
RF Site Survey: What It Is And How To Conduct It
RF Interference: What Is It And How To Minimize It
WiFi map and the best WiFi heat mapper apps
Create a WiFi heatmap with NetSpot WiFi analyzer.
Everything You Need to Know About WiFi Heat Map
What WiFi Site Survey Is And The Best Software to Perform It
Find the Best WiFi Router Placement in Your Home
Get NetSpot for Free
Wi-Fi Site Surveys, Analysis, Troubleshooting runs on a MacBook (macOS 10.10+) or any laptop (Windows 7/8/10) with a standard 802.11a/b/g/n/ac wireless network adapter.
Get NetSpot