How Can I Always Find WiFi Networks Near Me?

Are Places with Free WiFi Near ?

You’ve probably noticed that the number of public WiFi networks is constantly rising. In fact, Statista projects the number of public WiFi hotspots worldwide to grow to 542 million by 2022, up from 279 million in 2018. This staggering growth is driven mostly by our insatiable desire to always stay in touch with the ones we care about as well as by our love for internet-enabled technology.

But in our hunt for WiFi internet access, we sometimes forget to pause for a moment and think about our security. After all, most people today don’t hesitate at all before they connect to a public network they’ve never encountered before and use it to transmit sensitive information, such as login names, passwords, social security numbers, credit card numbers, and so on.

The reality is that some places with free WiFi near meeting spots and other public venues are indeed not worthy of our trust. Even today, it’s still possible to stumble upon an unsecured WiFi network. What’s worse, some WiFi networks are rogue, which means they’ve been installed on a secure network without explicit authorization from a local network administrator, typically to steal passwords and other sensitive information from unsuspecting users.

there are many useful apps for finding nearby WiFi

All of this doesn’t mean that public WiFi networks are unsafe — it just means that you have to carefully pick which of them you connect to and which you avoid. The good news is that there are many useful apps for finding nearby WiFi, and we introduce five of them in the next section.

What Are the Best Apps for Finding WiFi Near Me?

With the right apps, public WiFi networks seem to be everywhere. Compared to the WiFi selection tool in your smartphone or computer, dedicated WiFi apps give you more options how to locate WiFi networks, including those that have been hidden, and they can point you toward WiFi networks that don’t happen to be in your vicinity.

#1
NetSpot — is our top pick for a WiFi near me app.
#2
Wiffinity — is a mobile platform that provides free WiFi connectivity in every city in the world.
#3
WeFi — is a handy WiFi near me app that automatically connects your device to the best network in every location.
#4
Avast Wi-Fi Finder — is a convenient WiFi near me app with a database containing millions of active hotspots around the world.
#5
WiFi Map — allows you to seamlessly connect to over 100 million hotspots worldwide.

Our top pick for a WiFi near me app is NetSpot. This versatile general-purpose WiFi analysis application differs from our other recommendations because it doesn’t contain a list of free WiFi hotspots, nor does it help you connect to premium subscription-based hotspots. It can, however, collect live WiFi data from all surrounding networks, including those that have been hidden.

Besides finding WiFi networks, NetSpot is also perfect for WiFi optimization. Thanks to its modern user interface and excellent usability, even inexperienced users shouldn’t have any problem using NetSpot to find and minimize signal weak spots and do other things that are necessary for creating a dependable WiFi network.

Wiffinity
Available for Android and iOS

Wiffinity is a mobile platform that provides free WiFi connectivity in every city in the world.It displays an interactive map where you can see all available hotspots near you. Just click on the Free WiFi Near Me button, and Wiffinity will show you how far the nearest WiFi hotspot is and how you can get there. 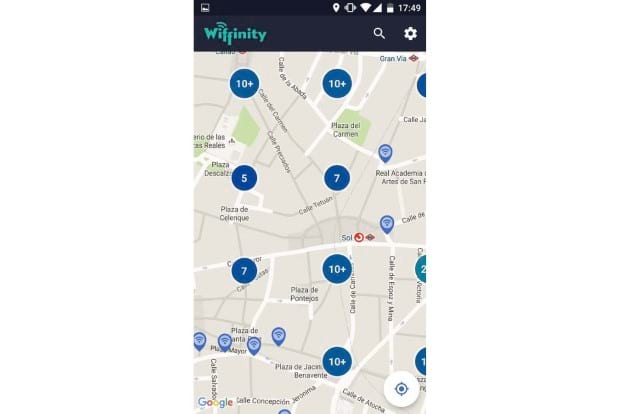 If you ever happen to find a WiFi network that’s not in Wiffinity’s large database, you can add it yourself to help people who are searching for places with free WiFi. Wiffinity is available on Android and iOS, and we definitely recommend you keep it on your phone if you travel often and are always hungry for free WiFi connectivity.

WeFi
Available for Android 4.1 and up

WeFi is a handy WiFi near me app that automatically connects your device to the best network in every location. Instead of always frantically looking for places with free WiFi, you can simply run WeFi in the background and benefit from its large map of WiFi hotspots. 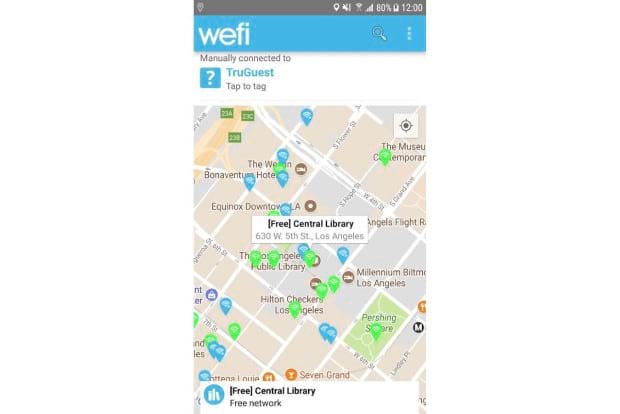 WeFi promises to deliver up to two times faster data transfer speeds on average compared to manual hotspot selection. Best of all, WeFi is constantly growing, and new restaurants with WiFi, cafés with WiFi, and other venues are being added to it on a daily basis. 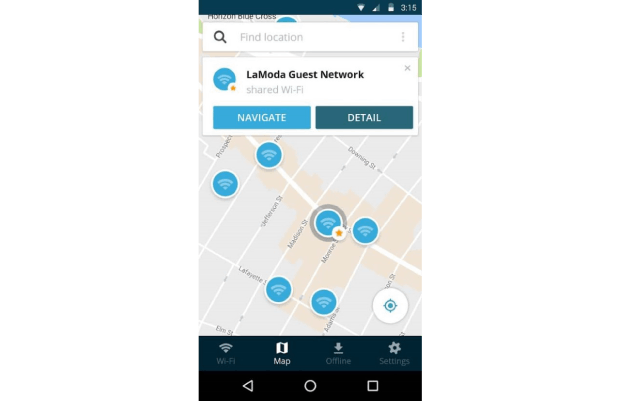 If you live in a larger city where you’re likely to encounter other users of the app, your chances of never having to ask for a WiFi password again are pretty high. The app also has a built-in speed test, so you can test whether you’ve connected to a good WiFi, and it can even download a list of hotspots to your device and find the best WiFi without a connection.

WiFi Map
Available for Android 4.3 and up

WiFi Map allows you to seamlessly connect to over 100 million hotspots worldwide, providing you with passwords for most of them. The app displays hotspots on a map, and it has smart search functionality with customizable filters and plenty of options to play with.

To use it, just click on the “WiFi providers near me” button, and wait for it to display the results. If you stumble upon a particularly excellent WiFi hotspot, you can share it with your friends using WiFi Map. Of course, you can also add new hotspots to the app to give something back to the whole WiFi Map community.

NetSpot
Wi-Fi Site Surveys, Analysis, Troubleshooting runs on a MacBook (macOS 10.10+) or any laptop (Windows 7/8/10/11) with a standard 802.11a/b/g/n/ac/ax wireless network adapter.
Have more questions?
Submit a request or write a couple words.

If you want to get more information about Wi-Fi, check out the following articles about Wi-Fi routers, the best apps for wireless networking, WiFi signal, etc.
WiFi direct - what it is and how it works
Learn more
Locate Wireless Connections with the best WiFi Finder apps
Learn more
10 best WiFi Apps for Android to Get the Most of Your WiFi
Learn more
Get NetSpot for Free
Wi-Fi Site Surveys, Analysis, Troubleshooting runs on a MacBook (macOS 10.10+) or any laptop (Windows 7/8/10/11) with a standard 802.11a/b/g/n/ac/ax wireless network adapter.
Get NetSpot