We hope that by the time you finish reading this article, you will have the confidence to access your router’s admin interface and change its settings to improve your online experience.


The reason why we don’t simply give each device its own public IP address is simply: there are not enough public IP addresses for all networked devices. For IPv4, there are “only” 4,294,967,296 IPv4 addresses, which may sound like a lot at first, but it’s important to realize that the number of connected devices is projected to amount to 75.44 billion worldwide by 2025.

Until IPv6, the most recent version of the Internet Protocol (IP), is adopted by most internet service providers, we have to rely on private IP addresses like 192.168.15.1 to avoid IPv4 address exhaustion.

What’s important is to realize that routers don’t use the 192.168.15.1 IP address just to identify themselves to other devices on the same private network. They also use it to expose their admin panels, which allow you to change various settings and make sure your connection is secure.

If you want to learn more about private networks, you can download NetSpot and use it to visualize, manage, troubleshoot, audit, plan, and deploy wireless networks. 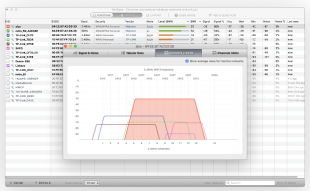 Once you’re inside the router’s admin panel, there should be quite a lot of options to play with. If you haven’t done so already, you will most likely want to change the router’s default admin password to something more secure. You may also want to review your wireless security settings and make sure that your connection is encrypted and protected by a strong password.

If you’re not afraid to dig a bit deeper and explore some of the more advanced options routers typically come with, you could prioritize traffic so that more important traffic can pass first by activating Quality of Service (QoS), or you could redirect a communication request from one address and port number combination to another while the packets are traversing a network gateway with port forwarding.

As we’ve explained in the previous section, it takes just a few simple steps to log in to a router using the 192.168.15.1 IP address, but there are certain common restrictions that may make everything more difficult for you. Fortunately for you, we know how you can solve them.

Perhaps the most common reason why people fail to log in to a router is that they don’t know the correct admin username and password. Most routers have the default username and password combination printed on a sticker located at the bottom, so that’s where you should start.

There are also certain common default username and password combinations that we recommend you try before you contact the router’s manufacturer and ask for help:

If you’re sure that the 192.168.15.1 IP address is the correct private IP address of your router, but the admin page isn’t loading, there could be a connection problem between you and your router. We recommend you establish a physical connection to the router using an Ethernet cable and try again.

If the 192.168.15.1 IP address doesn’t work, the chances are that your router is using a different private IP address. To find out what it is: