What Is a Channel Overlap and Which WiFi Channel Analyzer Apps Can Detect It?

Wireless networks operate on five distinct frequency ranges: 2.4 GHz, 3.6 GHz, 4.9 GHz, 5 GHz, and 5.9 GHz. Each frequency range is divided into several channels to minimize interference and network congestion. In this regard, WiFi channels are like road lanes. Just like multilane roadways can carry greater volumes of traffic than two-lane roads, so do WiFi channels allow more users to enjoy maximum download and upload speeds at the same time.

Because each channel on the 2.4 GHz spectrum is 20 MHz wide and the channel separation is only 5 MHz, only three channels don’t overlap with any other channels: 1, 6, and 11. This is important because WiFi channel overlap is a common cause of interference and performance degradation.

When you received your home router from your ISP, the chances are that you weren’t paying much attention to all configuration options available. One available option lets you choose which WiFi channel the router should operate on. It’s paramount that you pick a channel that isn’t already occupied by several other nearby wireless networks. But without a wireless channel scanner, you have no way of knowing which channels are busy and which are free from traffic.

A wireless channel scanner such as NetSpot can instantly scan all wireless networks in your area, detect which WiFi channels they run on, and provide you with other useful information that you can use to select the best possible WiFi channel.

Some wireless channel scanners can also help you optimize the strength of your wireless network by generating a WiFi strength heatmap of your local area and highlighting areas with insufficient coverage.

NetSpot is both an excellent WiFi channel scanner app and a WiFi survey tool. NetSpot features two distinct modes of operation: Discover and Survey. The Discover mode is what you need when you want to discover WiFi channel overlap. 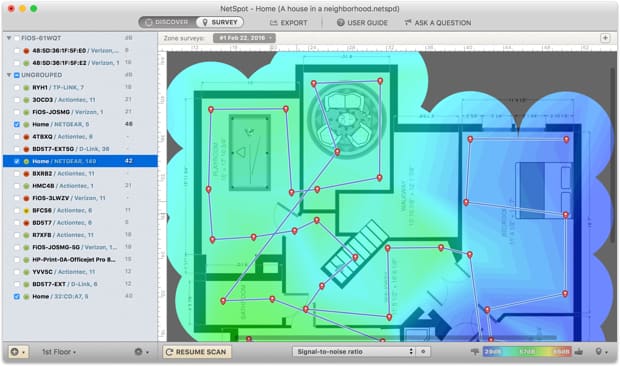 When you activate it, NetSpot immediately analyzes all nearby wireless networks, gathers all available information about them, and presents its findings sorted as an intuitive list. You can then zoom in on individual wireless networks to learn more about them, or you can switch to the Survey mode and conduct a wireless signal strength site survey to discover dead zones. NetSpot is also one of the easiest WiFi analyzer apps to use, even though it’s used daily by countless network professionals around the world.

Integrated into macOS is a handy WiFi analyzer tool that has much of the same functionality as many other free WiFi analyzer apps available from the web and App Store. The name of this tool is Wireless Diagnostics, and this is how you can access it: 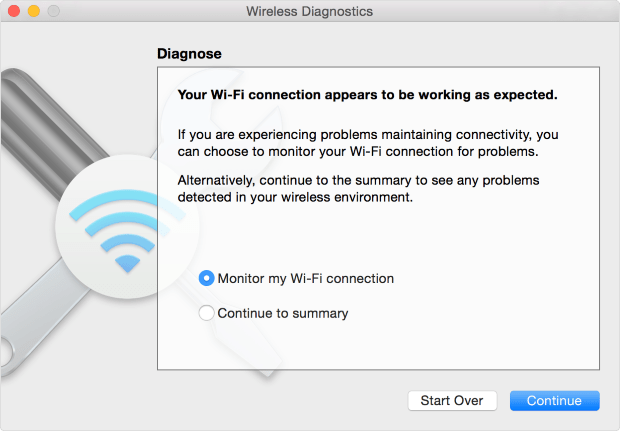 WiFi Scanner can scan for surrounding networks and supply vital WiFi information needed for troubleshooting purposes. The app allows users to narrow down the results using customizable filter options, it can plot 2.4 GHz and 5 GHz channel graphs to display WiFi channel overlap, and it even includes a handy speed test feature so you can test the performance of your network in various areas. The information you gather using WiFi scanner can be exported into CSV files, making it easy to share it with others. 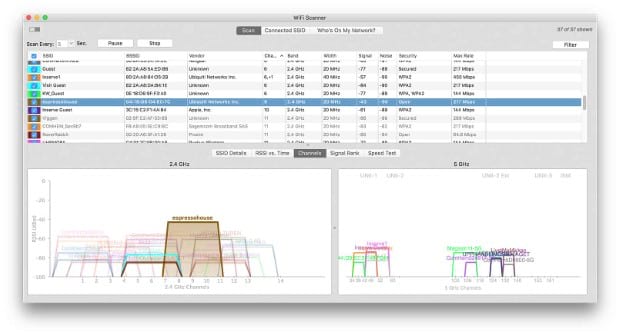 Apart from WiFi networks, iStumbler can also find Bluetooth devices and Bonjour services. The app supports both the 2.4 GHz frequency range as well as the increasingly more popular 5 GHz frequency range. Unlike many other WiFi analyzer apps, iStumbler isn’t free. The app costs $9.99 for all the computers that you own, and you can purchase your license in the store or right in the app. iStumbler works on all Mac computers running macOS 10.10 (Yosemite) or later.

KisMAC is a free and open source wireless analysis and security auditing tool for macOS. It’s built upon the original KisMac, which was developed by Michael Rossberg and Geoffrey Kruse. Unfortunately, the original KisMac hasn’t been updated since 2011, so Vitalii Parovishnyk, the lead developer of the current iteration of KisMAC took over and continued from where Michael Rossberg and Geoffrey Kruse had stopped. KisMAC works on all versions of macOS from 10.9, and it features an updated user interface that makes the software easier to use than ever before.