If your wireless network is giving you headaches, the chances are that you can fix it by yourself using nothing but an inexpensive WiFi analyzer app for iOS.
top choice

Most WiFi analyzer apps that run on the iPhone or the iPad cost just a few dollars, yet they offer virtually all the functionality that a home user might ever need. Instead of contacting your Internet service provider, we suggest you continue reading this article to learn more about WiFi apps for iOS and to find out what are the best iOS WiFi analyzers currently available on App Store.

Why Do You Need to Use a WiFi Analyzer App?

If you live in a larger city, it’s already almost impossible to escape the WiFi signal, and, according to the Wireless Broadband Alliance, total public WiFi hotspots will grow sevenfold from 2015 to 2023, from 64.2 million in 2015 to 432.5 million by 2023. In many ways, it’s great news that wireless Internet access is becoming more accessible. But the proliferation of WiFi hotspots also has some negatives.

The WiFi radio spectrum is divided into several channels. When too many WiFi hotspots broadcast on the same channel, traffic congestions may occur, and data packets may get lost, leading to connection drops and poor speeds. The solution is to use a WiFi channel with the least amount of traffic. But how can you tell which channel that is? The answer is simple: you download and use a WiFi analysis tool.

When it comes to WiFi analysis, there are comprehensive solutions for Windows and Mac computers, such as NetSpot, which can build a comprehensive heatmap of your network and tell you everything you need to know about WiFi activity in your area.

And of course sometimes you might need to use a mobile WiFi analyzer on your iPhone. NetSpot has a mobile version available on the App Store that is an excellent wireless problem solver!

What Kind of Features Should a WiFi App for iPhone Have?

If you don’t like the idea of wasting your time on poorly programmed apps that don’t do what they are supposed to do, be prepared to spend a few dollars on a professional app that works flawlessly right out of the box. WiFi analyzers of iOS usually cost around $5, which is a fair price for what you get.

Make sure to check when the app was last updated because you shouldn’t spend your money on an app that’s no longer maintained by its developer.

Never settle for an app that’s not easy to use, even when it’s on sale and has otherwise good reviews. In this day and age, there’s no excuse for poor usability or an unfriendly interface design. Even professional WiFi analyzers with tons of features, such as NetSpot for iOS, can be intuitive and approachable.

Check our picks for the best WiFi analyzer apps for Android.

What Are the Best WiFi Analyzer Apps for iPhone?

We have selected six best WiFi analyzer apps for iPhone that we believe offer the most compelling features and the best value for your money.

NetSpot for iOS
Needs iOS version 10.0 or higher. Requires the WiPry 2500x device for most of the features.
NetSpot for iOS supports both 2.4 and 5GHz wireless frequencies and the latest WiFi standards — 802.11a/b/g/n/ac/ax.

It boasts an on-point well-organized user interface, which makes the app very usable and places all necessary information right in front of you. Free NetSpot for iOS has Discover Mode that allows you to observe and study various network parameters in real time — the network name, signal strength, security protocol; you can sort the real-time data by signal strength or name. Currently, to use NetSpot's discover features, the WiPry 2500x accessory is needed.

NetSpot for iPhone now offers an essential option of measuring the Internet speed of the network you are connected to. You can quickly measure the download speed and the ping value and if needed compare these values to your previous test results for a more profound analysis. You don't need the WiPry 2500x device to perform the Internet speed test and this is an absolutely free feature! 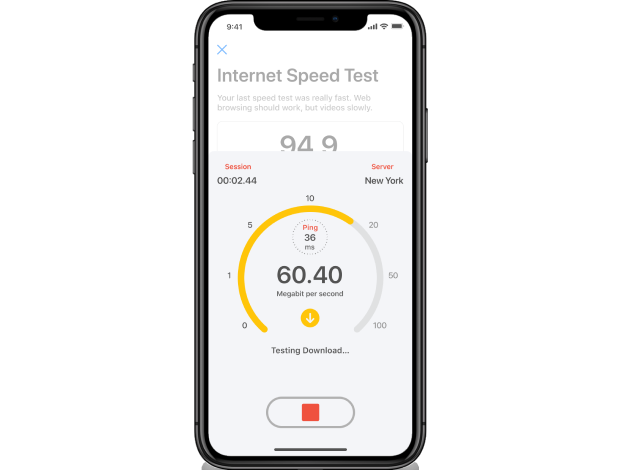 With the obtained data on hand you can improve your wireless coverage significantly. If you need to check your Internet download speed, that's easy to do with NetSpot for iOS.
choice #2

Network Analyzer is one of the more approachable WiFi analyzer apps on this list. The app has been designed to help iPhone users troubleshoot various networking problems, such as poor signal strength, connection drops, or high latency. Network Analyzer includes a capable WiFi scanner that can quickly and reliably detect all nearby network devices. 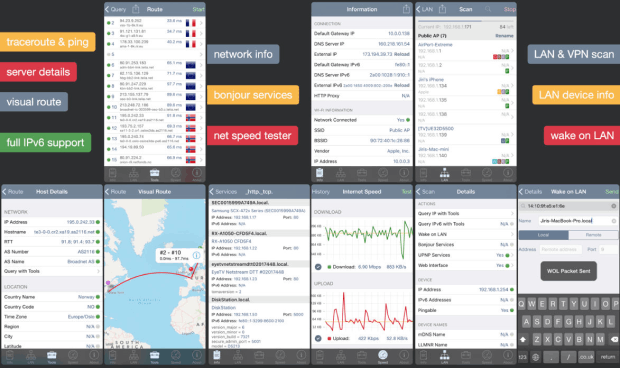 You can also use Network Analyzer to perform a DNS lookup, test both download and upload speeds, and learn all the essential information about any wireless network. To enjoy all the features Network Analyzer has to offer, you will have to spend 4,49 €, which is a fair price considering how much the app can do.

Have you ever wondered which route data packets take to get from the server to your home router? With WiFi Analyzer, you can find out just that and much more. The most recent version of WiFi Analyzer can quickly detect all nearby wireless networks and gather information such as SSID, BSSID, IP address, subnet mask, and others.

Integrated into the app is an accurate speed test, allowing you to measure your real download and upload speed and compare the measured values with historical data to determine whether you’ve successfully optimized your network for better performance. Just like Network Analyzer, WiFi Analyzer is also a paid app. It costs $5.99, which is nearly double the price of Network Analyzer.

IT Tools
Requires iOS 11.0 or later. Compatible with iPhone, iPad, and iPod touch.

IT Tools is a versatile networking suite of tools, most of which revolve around packet tracing. But IT Tools also has an integrated WiFi analyzer iOS. The analyzer supports IPv6 scanning via broadcast addresses and handles all Bonjour and mDNS services, including all extra data stored in the TXT record. 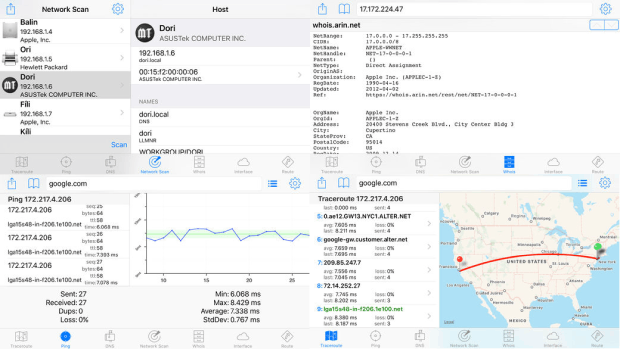 Thanks to continuous traceroute, IT Tools provides details of the network hops to the destination host. Best of all, IT Tools relies heavily on visualizations to make the gathered data easier to understand. The regular price of the app is 6,99 €, but you may get lucky and spot it while it’s on sale.

Fing is a free and easy-to-use network scanner that has already been used by millions of home and professional users to discover network devices and diagnose common WiFi problems. Fing includes a WiFi scanner with advanced analysis capabilities, an Internet connectivity checker, a subnet scanner, a port scanner, network intruder detection tools, and support for device identification by IP address for bridged networks, among many other things. 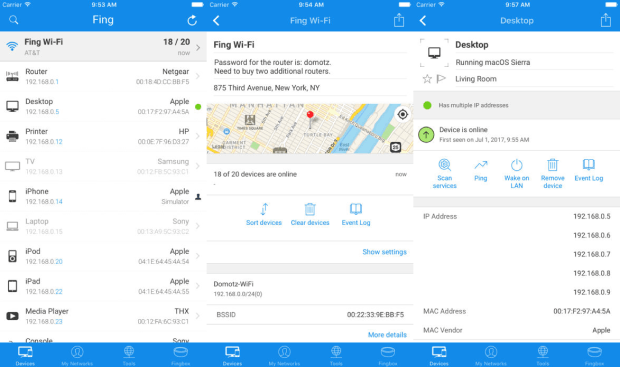 Fing has been upgraded numerous times since the app has been released on App Store, and the latest version is compatible with all iOS devices running iOS 9.0 or later.

Don’t let the dark color scheme deceive you into thinking that Scany is some kind of hacking app. In reality, Scany is one of the best iOS WiFi analyzer apps. Scany can detect all nearby wireless networks and find the computers and devices connected to them. 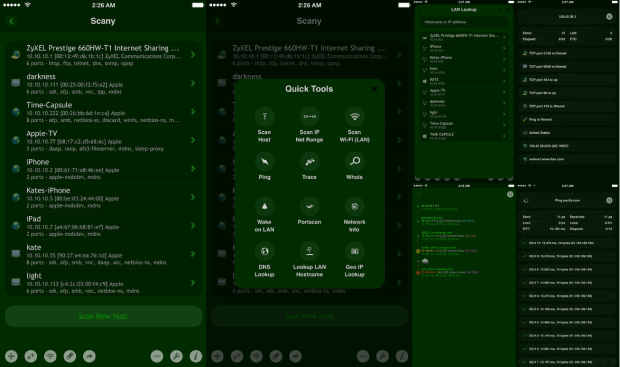 Apart from wireless analysis, Scany also features a fast port scanner and a real-time network path traceroute monitor. Like so many other WiFi analyzer apps for iOS, Scany costs 6,99 € and is available for all newer iOS devices.

Why Do I Need to Use a WiFi Analyzer App?

When there are too many wireless networks around and they all broadcast on the same wireless frequency channels, the easiest way to find out which ones are the most loaded is to use a WiFi analyzer app. After seeing which channels get overcrowded, you'll be able to choose the least utilized one for your own network.

What Kind of Features Should a WiFi App for iPhone Have?

WiFi analyzer apps offer the same set of basic features, but some may be offering more advanced options that can be useful for your specific goals. You definitely don't want to spend any money on an app that hasn't been maintained by its developer and offers no tech support.

No matter the number of features, you have the right to expect a WiFi analysis app to be easy-to-use, have a neat design, and provide you with comprehensive output. If reading the reviews, don't just look at the stars — look at what people are actually saying to see what might be relevant for you.

What Are the Best WiFi Analyzer Apps for iPhone?

Here are six great WiFi analyzer apps for iPhone with solid features that offer you bang for your buck:

If you want to get more information about Wi-Fi, check out the following articles about Wi-Fi routers, the best apps for wireless networking, WiFi signal, etc.
Use WiFi analyzer to get a perfect WiFi coverage I NetSpot
Learn more
WiFi spectrum analyzer and what it is for
Learn more
The Best WiFi Channel Scanners for iOS (iPhone, iPad)
Learn more
NetSpot for iOS
Discover surrounding WiFi networks, get the real-time data and
analyze it on the spot. You'll need iOS 11.0 or newer