All of the acronyms and buzzwords surrounding WiFi can be confusing. Let’s break through the clutter and explain the difference between the different types of WiFi, speeds, encryption, and what it means for you.
top choice
Get NetSpot

WiFi relies on a simple idea: instead of sending signals through a wire, send through the air. It’s evolution follows the same route as the telephone: first telephone calls were transmitted over wires, then the air. Networks went the same way — first with thick cables, then smaller faster ones, and now transmitted through the air all the way to satellites in space.

WiFi Standards In A Nutshell

WiFi means “Wireless Fidelity.” Which probably makes little sense — it doesn’t actually stand for wireless network (what would we call that anyway? WiNi and pronounce it Why Nie?). Wireless Fidelity is the measure of how accurate the signal is.

There are all sorts of acronyms for the different flavors of WiFi networks, but they all basically mean a few things:

Of course, WiFi signals aren’t cars, but the analogy works pretty well. Just think how far can a network go, and how fast can it transmit data and the standards will make more sense.

Who sets the standards for WiFi? That’s left up to the IEEE (Institute of Electrical and Electronics Engineers). These are the people who sit around and decide things like how many bits are in a byte and the standards for encryption. They’re not going to come to a company’s house and take their lunch money if they don’t comply, but companies participate and go along with that the IEEE standards decides so their things work well together.

From this group, we get the various flavors of WiFi. They’re all called the IEEE 802.11 standard with the letter after the 802.11 numbers. The usual rule is the higher the letter, the faster the speed of the network. Almost all of these function over a range of about 30 meters (150 feet).

Each network can be broken down by a few different settings:

Here’s a WiFi standards chart of each 802.11 standards type based on

The second rule is a combination of numbers means the router support different network types. So when networks like 802.11 ac, 801.11 ad, 802.11 abg are listed, it means that each of those types is supported by that router. In 2018, expect almost every type of network to be supported by a router to work with both older computers and modern systems.

Over time, different classifications of WiFi networks were given different naming conventions. Rather than “802.11b”, it’s just “WiFi 1.” Much like how mobile phone companies refer to 3G and 5G as different network speeds even though the term is almost always just a marketing tool. This classification is supposed to help make it easier for consumers to understand — instead of understanding a whole alphabet soup, users can just look for “WiFi 1” or “WiFi 5” as what they need.

This will allow for multiple frequencies to transmit data at the same time, increasing the potential 3 Gbps — though as in any real-world situation, it will likely be slower, likely 600 Mbps. Still much faster than the current systems.

So when is this standard going to be released onto the world? Officially, the standard should be released in December of 2018, but as with WiFi 4 and 5, companies were releasing routers with this designation before the standard was finalized, usually calling it “801.11 ax MAX” or other designations.

If a router claims to be 802.11ax compatible — it’s not, though with firmware updates they could be in the future. But if you’re impatient, start with Aerohive or NetGear.

WiFi 6 also supports advanced encryption and authorization systems. This means that it will be easier to have devices join a public WiFi network while still keeping private information private. As more people connect in coffee shops, libraries, churches, and schools, keeping bank connections and other secure communications from prying eyes will be essential.

There are more information leaks and data being sold online, so these enhanced encryption techniques will make it safer to be out on public WiFi systems.

With the new standards coming, what’s the best way to prepare? Things aren’t going to stand still and wait. Already, older devices are finding it harder and harder to connect to a modern WiFi world, like older tablets and portable gaming systems.

To keep compatibility, make sure that routers purchases can support legacy devices and be upgraded in the future. If there’s already a network in place, it’s a good idea to understand how the network works. 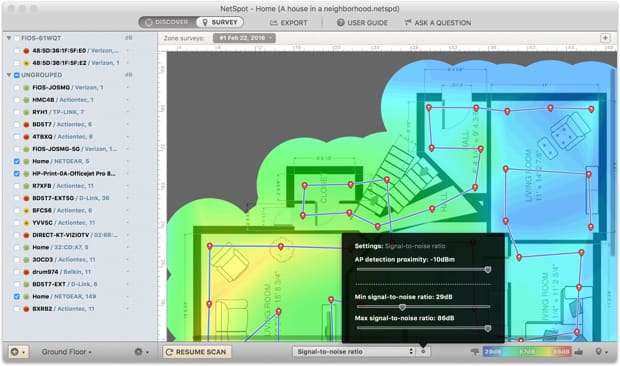 Using a network analyzer like NetSpot can show how routers work now in the building. NetSpot can find where signals are weakest, locate dead spots, and how much “noise” is on the network compared to “signal.”

With this information, you can set up the best place to place the routers (and repeaters in a mesh network) to get maximum effect. This way then the new 801.11ax routers are put into place, there won’t be any question about whether they’re in the best place when they replace the older ones. And NetSpot will help find any additional networks that might interfere with the new ones.

If you want to dive deeper into this Wi-Fi thing, check out the following articles about Wi-Fi security, the best apps for wireless networking, inflight WiFi, etc.
All You Need to Know About WiFi Routers
Learn more
Choose your WiFi router and set it up with NetSpot
Learn more
A new Google Wifi modular home WIfi system
Learn more

How to set up WiFi at home with NetSpot
WiFi direct - what it is and how it works
The most important WiFi settings you need to know about
Wireless access point and how to set it up
How to check RSSI value with NetSpot
What is a WiFi Hotspot and how it works with NetSpot
What you need to know about WiFi calling
Why a router has just two WiFi frequency bands and how they work
How to Detect WiFi Interference With the Help of NetSpot
Get the answers to the most common WiFi questions with NetSpot
Get NetSpot for Free
Wi-Fi Site Surveys, Analysis, Troubleshooting runs on a MacBook (macOS 10.10+) or any laptop (Windows 7/8/10) with a standard 802.11a/b/g/n/ac wireless network adapter.
Get NetSpot