How to Kick People Off Your WiFi Network

Even though the access to WiFi networks has become ubiquitous over the years, many people still wonder how to block WiFi users from accessing private networks they are not authorized to access.
CHECKED BY
Get NetSpot
Jump to...
How Can I Indirectly Detect Who Is Using My WiFi?
What Are the Possible Consequences for Someone Who Is on My WiFi?
How to Check Who Is on My WiFi?
How Can I See What Devices Are Within the Range of My WiFi?
FAQ

How Can I Indirectly Detect Who Is Using My WiFi?

How to kick someone off your WiFi so you can enjoy your Internet connection to its maximum capacity and never deal with slowdowns and connection drops ever again? Our secret weapon, our mighty WiFi user blocker, won’t be any expensive hardware device nor software application. Instead, we will rely solely on the capabilities that are already present in your router, although we will recommend a few useful software tools.

There are many signs that can tell you that someone who shouldn’t is using your WiFi:

What Are the Possible Consequences for Someone Who Is on My WiFi?

When an unauthorized user accesses a computer network, he or she might be committing a real crime, depending on which legal code the unauthorized user falls under. For example, unauthorized access, modification, or impairment of data held in a computer system is a federal offence under Australia’s Criminal Code Act 1995.

In Japan, accessing a wireless LAN network without authorization is not a crime, even if the network is protected with a password. In the United States, there are various federal and state laws addressing the issue of unauthorized access to wireless networks, with some laws requiring monetary damages and others criminalizing the mere unauthorized access of a network.

Most people who access WiFi networks without authorization don’t realize that they could be committing a crime, so a simple warning is often enough to scare away most intruders. If you live in an apartment building, you could, for example, post a sign saying, “I know about the person who is connected to my network, and I also know that WiFi stealing is a punishable crime”.

How to Check Who Is on My WiFi?

If you want to block WiFi users, software solutions are not needed because your router most likely already comes with blocking capabilities built-in:

How Can I See What Devices Are Within the Range of My WiFi?

Now that you know how to see who is on your WiFi, you might be wondering how to tell who is within the range of your WiFi network. You can measure how far your network reaches with the help of a professional app for wireless site surveys and WiFi analysis, such as NetSpot, which is widely considered to be the best free WiFi analyzer for Windows and Mac computers. 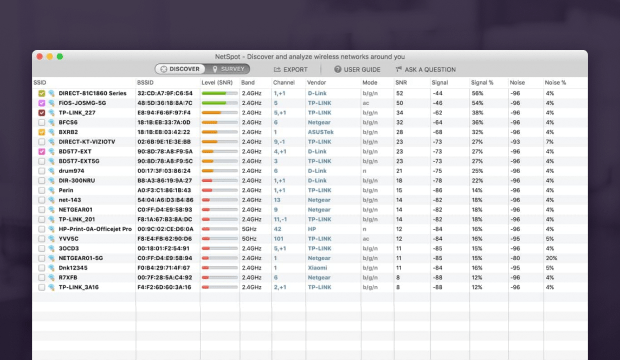 With NetSpot, you can easily create a WiFi signal strength heatmap to see how far from your router it is still possible to connect, and NetSpot can also highlight signal weak spots, helping you optimize your network for maximum performance.

To download NetSpot and explore all of its features, visit its official website and try it for free.

How Can I Indirectly Detect Who Is Using My WiFi?

There are some discreet ways to tell that someone unauthorized has connected to your wireless network:

What Are the Possible Consequences for Someone Who Is on My WiFi?

Everyone generally agrees that unauthorized access to a computer network is illegal. For example, piggybacking is considered to be a Class A misdemeanor in the state of New York. In Australia it is a federal offence to access a network without authorization, as well as to modify or impair data while on it. Some countries, however, do not consider it an offence to access a wireless network without permission.

While there seems to be not enough unity and clarity in the laws, it is highly recommended not to use a WiFi connection without the owner’s permission.

How to Check Who Is on My WiFi?

If you don't know it yet, figure out what your router's gateway IP address is, and then type in your web browser search box. Look for the IP on the back panel of your router or look it up online.

In the router's web interface enter the administrator login and password, which you can look up in the router's documentation, if you haven't changed the manufacturer's defaults. View the list of attached devices - you should see the name and MAC address for each one connected. The devices that don't look like anything familiar to you, are probably there without any authorization.

How Can I See What Devices Are Within the Range of My WiFi?

You can tell which devices are in the range of your WiFi network by measuring how far your network's signal extends. Use a professional WiFi analysis tool like NetSpot to see how far and how well your wireless network reaches and determine which devices might need to be moved closer in order to get a better signal.

Read next in Wi-Fi Security

How to keep your wireless network safe, plus tips on which encryption to use, how to know who is connected to your network, etc.
Check the 6 Ways How To Secure Your WiFi Network
Learn more
Learn Everything About WiFi Security
Learn more
Top 7 Ways How to Stop a WiFi Hacker
Learn more
Get NetSpot for Free
Wi-Fi Site Surveys, Analysis, Troubleshooting runs on a MacBook (macOS 10.10+) or any laptop (Windows 7/8/10/11) with a standard 802.11a/b/g/n/ac/ax wireless network adapter.
Get NetSpot