WiFi Site Survey Android: What It Is and How to Perform It?

Your Android device can tell you a lot of useful information about your WiFi network and its performance. You just need the right Android app, such as NetSpot WiFi site survey Android.
top choice
Jump to...
What Are WiFi Site Survey on Android?
Choosing Between Available WiFi Site Survey Apps
How to Perform an Android WiFi Site Survey with NetSpot

What Are WiFi Site Survey on Android?

Most activities you do on your Android device, from web browsing to instant messaging and video calling, depend on a stable and fast internet connection to the internet. That’s why ensuring that you always are within the range of a strong WiFi signal should be your top priority. 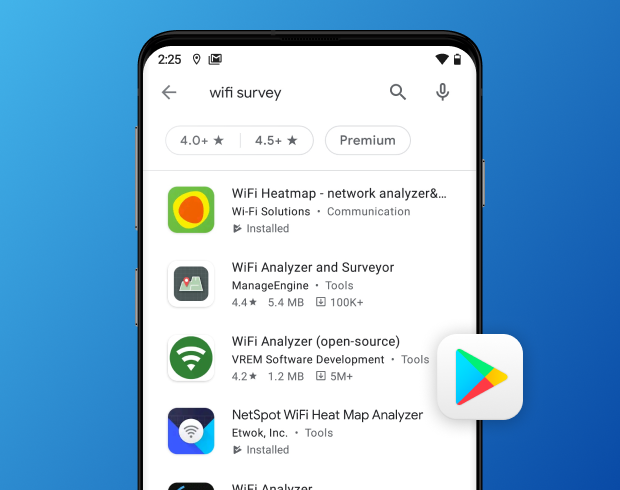 The good news is that your Android device can tell you a lot of useful information about the quality of your WiFi connection, helping you figure out why it’s not performing as well as it should and determine the best way to improve it. You just need to install an Android WiFi site survey app and use it to collect useful information about nearby networks, including your own.

If you’ve never performed a wireless site survey before, then it’s perfectly normal if you feel a bit confused now. But we have good news for you: performing each of the three main types of WiFi site surveys is as easy as installing the right WiFi site survey Android app on your device and letting it do all the work for you. The most difficult step then becomes the selection of the right app.

The demand for WiFi site survey apps has been steadily growing for a long time now. These days, the average home and office is filled with all kinds of electronic devices, from laptops to smartphones to Internet of Things gadgets, that connect to the internet wirelessly. It shouldn’t then come as a surprise that users can choose between all kinds of WiFi site survey apps regardless of which platform they use.

While the best WiFi site survey software for desktop operating systems like Windows and macOS tends to be the go to choice of professional network administrators, home users often favor the ease of use and convenience of WiFi site survey iOS and Android apps.

Unlike WiFi site survey software Mac and WiFi site survey Windows software, WiFi site survey apps for mobile devices don’t require you to haul around a bulky laptop — any smartphone or tablet works just fine. Of course, not all WiFi analysis mobile apps are created equal. Some provide only basic information, such as an overview of all nearby networks and their names, while others are capable of performing active, passive, and, in some cases, even predictive surveys.

The WiFi site survey app we recommend to Android users (as well as iOS, Windows, and Mac users) is called NetSpot.

NetSpot is a versatile WiFi site survey Android app that elegantly combines an intuitive user interface with powerful features, allowing you to survey spaces of any size and type with a few simple taps on the screen. The app is frequently updated to ensure compatibility with the latest version of the Android operating system, and it doesn’t require any additional hardware to do its job despite being able to collect and visualize 802.11a/b/g/n/ac/ax live data.

Recently, NetSpot for Android 2.0 has been released, introducing a number of improvements, such as the ability to export a WiFi site survey project and open it in NetSpot for Mac or Windows to generate thorough and comprehensive visualizations.

How to Perform an Android WiFi Site Survey with NetSpot

The Android version of NetSpot is widely regarded for its ease of use, so learning how to perform a WiFi site survey with its help won’t take you much time at all.

To get started, you first need to download the app from the Google Play Store. NetSpot for Android is both free to download and use without any limitations. Once installed on your device, you can go ahead and launch the app.

The first screen you’ll see after launching NetSpot for Android will present you with the following three options: 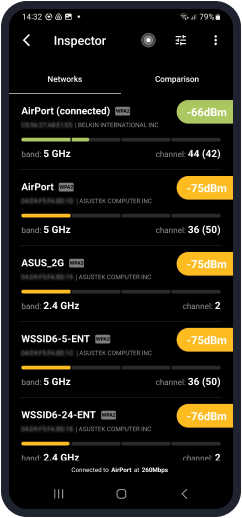 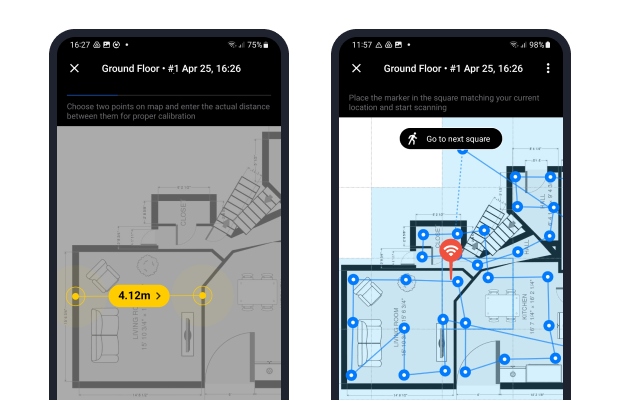 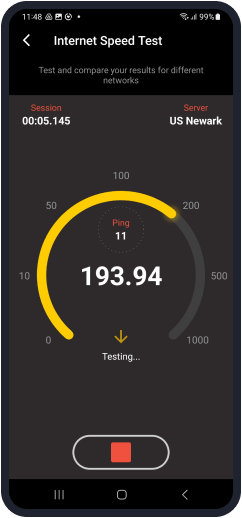 If this is your first time performing a WiFi site survey, then we recommend you start with the Discover option so that you can quickly and easily discover heaps of useful information about WiFi activity in your area. NetSpot will list all WiFi networks that are within range and tell you how each network is called, how strong its signal is, and which band and channel it’s broadcasting on, among other things.

From there, it’s a good idea to select the Survey option and create a detailed WiFi site survey to better understand how your own WiFi network performs and what you can do to make it perform even better. NetSpot will ask you to create a new WiFi site survey project and pick a map of the surveyed area.

You will then be asked to place a marker in your current location and start scanning. Your goal is to collect enough data so that the entire map is covered. You can then export the collected data and turn it into various WiFi heatmaps in NetSpot PRO or Enterprise on desktop.

Thanks to their visual nature, WiFi heatmaps make it easy to spot signal weak zones, discover sources of signal interference, and more. The insights they provide can guide you when making adjustments to improve the performance of your WiFi network.

Finally, you can use NetSpot’s Internet Speed Test feature to verify that the adjustments you’ve made have actually delivered the desired results and made your WiFi network perform better.

As you can see, NetSpot for Android is a comprehensive WiFi site survey solution that offers a collection of easy-to-use tools to help users with little to no previous WiFi analysis experience fix all kinds of connectivity issues in no time.