Mediacom Home Internet, marketed as Mediacom Xtream Internet, is a cable internet service provided by Mediacom Communications Corporation, the fifth-largest cable television provider in the United States based on the number of video subscribers.
top choice
Get NetSpot

In this in-depth review, we provide all the information you need to have to decide if Mediacom internet is the right choice for you.

At the time of writing this review, Mediacom offers four plans. Mediacom internet plans start at just $19.99 a month, and they go all the way up to more than $100.

If you’re confused because the highest price you see in the table above is | $79.99 a month, then Mediacom’s pricing strategy is working as intended. You see, Mediacom doesn’t have just two rates (promo rate and standard rate). Instead, the company increases prices three times: after 12 months, after 24 months, and after 36 months (only for the 1 GIG plan).

That’s why someone who has just started using the 1 GIG plan is paying just $59.99 a month, while someone who has been using the same plan for more than 36 months is paying $129.99. We find this pricing tactic misleading at best and shady at worst because it exploits the fact that customers don’t expect prices to be raised more than one.

Another thing you may not like about Mediacom internet packages is how limited they are in terms of your monthly data allocation. The cheapest plan lets you download only 200 GB of data a month, which isn’t much at all if you enjoy video streaming services like Netflix or regularly download large files for work-related or personal reasons.

The good news is that you really get the advertised download and upload speeds. In fact, you often get even more! The latest FCC Fixed Broadband report states that Mediacom internet speeds often exceed the advertised speeds by a good margin — even during peak hours.

Customers can check their current maximum download and upload speeds using the official Mediacom internet speed test. Those who discover that their speeds leave something to be desired should use a Wi-Fi analyzer tool like NetSpot to check their signal strength and interference.

With NetSpot, anyone can create a detailed yet easy-to-read map of Wi-Fi coverage and collect comprehensive information about nearby Wi-Fi networks to discover potential configuration issues.

Mediacom internet plans are available in the following regions:

Mediacom internet service is available to customers in 22 states. In total, nearly 8 million Americans can sign up for Mediacom cable internet, and you can easily check the Mediacom internet availability on the company’s official website. 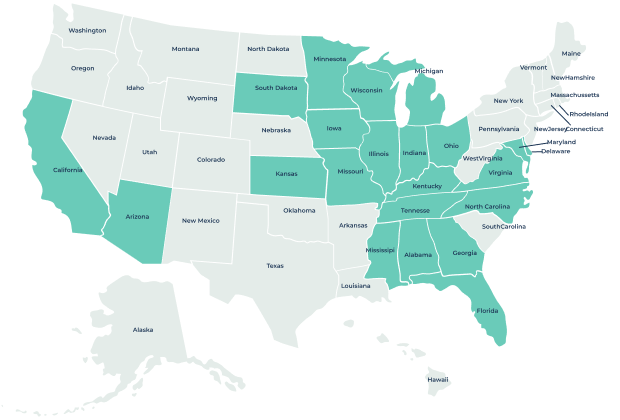 As a provider of cable internet services, Mediacom focuses predominantly on urban and suburban areas, with rural coverage being an exception. If you do live in a rural area, then you should look for DSL, Wi-Fi, or satellite internet providers.

Like most internet service providers, Mediacom charges its customers several fees — some more hidden than others.

The main fee you should know about is the monthly modem rental fee ($12). You can skip this fee by using your own DOCSIS 3.1 certified modem. Alternatively, you can purchase a compatible model from Mediacom for a single payment of $199.

If you would like to cover a two-story house or some other larger building with a strong Wi-Fi signal, then you can also rent the Xtream Wi-Fi 360 mesh system for $5.00 a month. Of course, you can also use your own mesh system — you just need to connect it to your Mediacom modem with an Ethernet cable (no need to purchase a dedicated Mediacom Wi-Fi plan).

The installation of the Mediacom router and modem costs $109.99, but deals for free installation are available from time to time, so you might get lucky and avoid this fee. Early termination fees depend on the length of your contact, and they can reach up to $240.00 for a two- or three-year contract and up to $120.00 for a one-year contract.

A single service call will cost you $49.00, so it’s best to take troubleshooting into your own hands (at least initially) and use tools like NetSpot to diagnose and fix various internet issues.

Mediacom high-speed internet can be bundled with cable TV and phone service for a single discounted price. The exact price will depend on which TV package you choose, and, as is characteristic for Mediacom internet prices, the difference between your promotional rate and the standard rate can be severe.

You can get in touch with Mediacom’s customer service by:

In the ACSI Telecommunications Study 2020-2021, Mediacom received a decisively below-average rating for not only its internet service but also its cable TV service.

The results of the J.D. Power 2021 U.S. Residential Internet Service Provider Satisfaction Study are more or less the same, putting Mediacom ahead of only a few internet service providers, including Sparklight, Cox, Frontier, Windstream, and CenturyLink.

Even the 90-day money-back guarantee isn’t enough to change user reviews in Mediacom’s favor because the first price hike happens after 12 months — a long time after customers lose the chance to get their money back.

Here are some Mediacom internet reviews from BroadbandNow :


Mediacom internet service is so unreliable that I have to unplug and restart my modem every day. I pay for 100Mbps speeds but average about 7.5. And if the modem has been plugged in more than 8hrs. I have to turn it off and back on to get it to work again.

Initially, my monthly bill was $40 per month. My internet wasn't great but at least it was somewhat affordable. After one year, it was increased to $60 without notification. Furthermore, my quality was still not great. $60 a month only for subpar internet is certainly not worth it. Comparable companies are offering a fixed rate of $45 per month.
• Colin

Speeds are alright, price is way too much for how inconsistent it is. The data cap is a pain to deal with sometimes and it constantly goes out. Overall, it's not the best service around. Customer service doesn't help you very much and when they do, it takes forever to come over.

If you live in an area with good Mediacom internet availability and are looking for a fairly affordable internet service with fast download speeds, then it’s possible that Mediacom Home Internet is a good fit for you.

But before you sign a contract, you should consider how much data you download in a month and check how much Mediacom will bill you after a few years. Also, look for Mediacom internet deals online to avoid paying the installation fee.

How much is Mediacom internet after the first year?

What is Mediacom Internet 300?

Mediacom Internet 300 used to be one of the less expensive Mediacom internet plans. This plan is no longer available because it has been replaced with the Internet 200 and 400 plans.

What is the highest Mediacom Internet speed?

What type of internet is Xtream?

Xtream is a cable internet service provided by Mediacom, the fifth-largest cable television provider in the United States.