Google Fiber is one of the youngest internet service providers in the country. When the service launched in 2010, its promise of affordable fiber-based home internet service seemed almost too good to be true.
top choice
Get NetSpot

In this review, we’re taking a closer look at this modern service to answer questions such as, “What is Google Fiber?” And “Where is Google Fiber available?” We hope that the answers provided in this article will help you decide if Google Fiber is the right choice for you.

There are only two main Google Fiber plans plus one special plan to choose from:

It’s really refreshing to see an ISP take such a simple approach to pricing, especially considering that some of the providers we’ve reviewed offer more than a dozen different plans, with certain plans often being available only in certain locations.

Best of all, all Google Fiber plans are completely unlimited, and you’re not required to sign any contract to get started.

Google Fiber Webpass is a special plan for point-to-point wireless internet that you can sign up for if you live in select high-occupancy buildings. Because this internet service is partially transmitted wirelessly, you can experience performance fluctuations due to adverse weather conditions and signal interference.

Unless you have very specific needs, we can guarantee that even the slowest Google Fiber speeds available will be more than fast enough for everything from high-definition steaming to video conferencing to online gaming. Should you ever experience any slowdowns or lag, you should immediately perform a Google Fiber speed test to see if you’re really getting the speeds you should be getting.

If not, don’t contact Google right away. Instead, download a Wi-Fi analyzer app called NetSpot and use it to create a map of your wireless coverage.

You can then use the obtained data to position your router better or change its configuration.

Google Fiber internet services are available in the following locations: 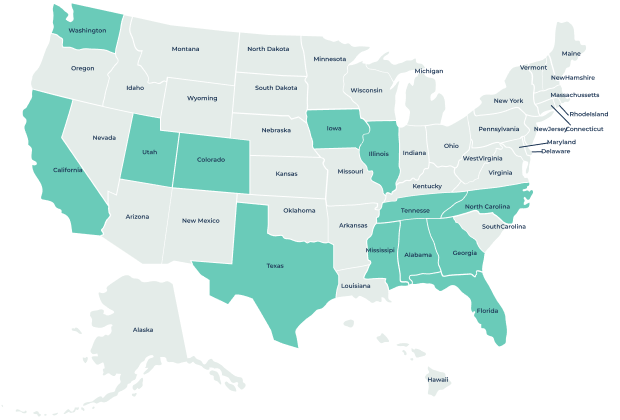 When Google Fiber was first announced, expectations were set for rapid expansion. For some time, Google Fiber availability was improving at a brisk pace, but the expansion came to a screeching halt when the company suddenly announced an immediate pause on all fiber-optic projects in 2016.

The reason why the Google Fiber coverage map is so sparsely populated likely has everything to do with how much it costs to run new fiber-optic lines. Back when the service launched in 2010, there wasn’t much competition, so the potential return on investment was much higher.

Unfortunately for Google, competing ISPs like AT&T Fiber, Spectrum, and Verizon Fios refused to let it dominate the market, and they now offer gigabit internet speeds in many areas where Google would probably otherwise have expanded already.

The good news is that the Google Fiber availability map is becoming busier and busier. In fact, the provider’s customer base increased by 100% from 2016 to 2020, largely thanks to innovative deployment techniques known as nanotrenching and microtrenching.

Soon, there will be a new dot on the Google Fiber map as the provider prepares to launch its internet service in West Des Moines, Iowa.

Google Fiber may just be the most straightforward internet service we’ve ever reviewed. Regardless of which plan you choose, there are absolutely no hidden fees or contracts to worry about, and your speeds won’t come to a crawl even if you decide to download the entire Wikipedia.

The only time when you may be asked to pay extra money is if you forget to return the Google Fiber WiFi system, which every new customer can get for free. The system consists of one or more Google Fiber routers, which work together to form a mesh network, allowing your devices to roam from room to room without disconnecting.

You can also expect Google to install the necessary Google Fiber modem (technically an Optical Network Terminal). The purpose of the modem is to convert the fiber signals (light) into electrical signals.

You can get in touch with Google Fiber’s customer service by:

There’s not much data available to objectively determine the quality of Google Fiber customer service.

The best we can do is analyze Google Fiber reviews:


Google Fiber is excellent, so much better and more affordable than Comcast. I am fortunate to have the option in my neighborhood. Wifi extenders on every floor give super fast internet throughout the house.
• Karen of Atlanta, GA

Just not a good value at $150/month for internet & TV, with no extra or specialty channels. The customer service is polite but they have little authority to correct anything & there is rarely any follow up by Google.
• David of Kansas City, MO

Google Fiber will not follow through with construction problems. Been months, calls, they even came and took photos only to not address the bare spots and damage to my lawn. They sure didn't have any issues coming on to my pro.
• Thom of Overland Park, KS

As you can see, Google Fiber reviews range from delighted to displeased. It seems that real users of the internet service complain mostly about Google Fiber support, installation, and billing issues — the usual stuff.

Google Fiber is a modern fiber-optic internet service that stands out with its straightforward plans that don’t hide any unpleasant surprises in the form of additional fees, data caps, or restricting contracts.

Unfortunately, the service is available only in select metropolitan areas, and some of the most populated cities in the United States, such as New York/New Jersey, Philadelphia, are still not covered Los Angeles, and it will probably take some time before they will be — if ever. But if you’re lucky and live in an area where Google Fiber is available, then don’t hesitate to give it a try because Google Fiber’s cost is hard to beat.

Will Google Fiber be available everywhere?

While the availability of Google Fiber has improved in recent years, it’s unlikely that the service will ever be available everywhere.

How much is Google Fiber a month?

Yes, all Google Fiber plans are completely unlimited, so you can download and upload to your heart’s content.

What is Google Fiber Wi-Fi?

Google Fiber Wi-Fi is a WiFi-6 enabled mesh system that can cover a large apartment or house with a strong Wi-Fi signal.

How fast is Google Fiber?

The Google Fiber internet service can reach speeds of up to 2,000 Mbps, which is theoretically enough for 400 simultaneous Netflix streams.

Get NetSpot for Free
Wi-Fi Site Surveys, Analysis, Troubleshooting runs on a MacBook (macOS 10.10+) or any laptop (Windows 7/8/10) with a standard 802.11a/b/g/n/ac/ax wireless network adapter.
Get NetSpot