Frontier Communications is an American telecommunications company with a long history. It was founded in 1935, and it has since then expanded its operations across a number of rural areas and metropolitan markets alike.
top choice
Get NetSpot


The first thing you will likely notice when you look at the two tables above is the vast difference in Frontier internet speeds fiber optic and DSL users get.

The good news is that all Frontier fiber optic and DSL plans are completely unlimited, so you can download and upload as much data as you want without ever having to worry about Frontier throttling your speeds to a crawl.

Like most other internet service providers, the prices Frontier advertises are discounted to attract new customers, and they don't last forever. After the first 12 months, you can expect to pay around $10 more, but the exact sum can vary by region, so you better read your contract carefully to avoid unpleasant surprises.

In general, Frontier internet prices are reasonable, but the differences between Frontier internet fiber optic and DSL speeds are huge, so you really need to carefully evaluate your needs and choose accordingly.

As a rule of thumb, we recommend you avoid the basic DSL plan, called Frontier Basic Internet. Offering just 9 Mbps download and 1 Mbps upload speeds, this plan is barely usable even if your needs are truly modest. For just $7 more, you can get the Frontier Preferred Internet plan, which is good enough even for light streaming and video conferencing.

Frontier internet plans are available in the following regions:


As you can see, Frontier internet coverage includes most of the Southeast, Northeast, Midwest regions, and West Coast regions. 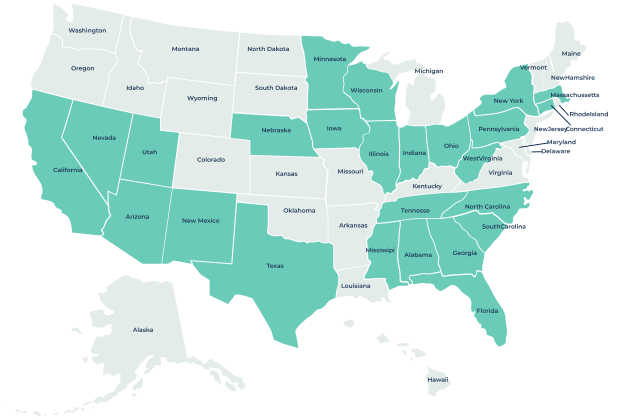 While Frontier internet availability is pretty good thanks to the broad coverage provided by the combination of fiber optic and DSL internet, the same can't be said about its reliability.

DSL customers in particular complain about frequent connection drops that often last for hours. Downdetector.com confirms that their complaints are well founded. In fact the Federal Trade Commission and six states are suing Frontier, alleging that the company doesn't provide its consumers with internet service at promised speeds.

Fortunately, the fiber optic service is much better when it comes to reliability, and even remote employees who depend on a stable internet connection should have no issues with it.

We've already explained that Frontier gives new customers lower introductory prices to lure them in. The good news is that there's no too many other potentially surprising expenses that you should be aware of.

Frontier charges new customers a one-time activation fee of $85, but avoiding this fee is quite easy thanks to frequent promotions that include a free activation.

Until 2020, Frontier used to charge $10 a month to rent a Frontier internet router, but those who bring their own modem can now avoid this fee thanks to the Television Viewer Protection Act of 2019 (TVPA), which makes it illegal for ISPs to charge customers money for using their own equipment.

If you're willing to pay $6 more every month, you can add the Frontier HomeShield Bundle to your plan to protect smartphones, tablets, and computers from digital threats. The bundle also includes advanced parental controls that make it easy to safeguard children while they surf the internet.

We recommend you skip the Frontier HomeShield Bundle and use the money to buy a Wi-Fi analyzer app like NetSpot.

With NetSpot, you can quickly and easily check the security settings of your wireless network (Open, WEP, WPA/WPA2 Personal/Enterprise), and you can also troubleshoot issues that commonly lead to sub-par internet speeds, such as wireless interference and poor router placement.

Whenever you use NetSpot to optimize your Frontier WiFi configuration, you should perform a Frontier internet speed test to verify if the changes you've made have actually improved your online experience.

You can get in touch with Frontier's customer service by:

Here's what some Frontier customers have to say about the provider on the BBB website, where it has a rating of 1 out of 5 stars:


I can even give them one star. I was told between 12:00 and 7:00 and showed up at 10:00 when we were not home, so we could not view the process of checking the voltage on the line. Left a long note, next day had a security company did the same test on the line and was comply different. I have videos and photos showing the reading. We have gone back and forth over four times, same thing nothing to see here!
• Andrew F

We were charged $9.00 a month for anti-virus protection for a PHONE LINE...not internet...over the last 8 years. Called and talked to customer service and they are refusing to waive a $58 balance on the account after we canceled service. What a horrible company. Never will I recommend or use this company again.

Worst company ever. They are in the communications business and they are terrible at communicating with their customers. Eight phone calls and more than 8 hours of my life wasted on trying to restore service and ultimately closing my account when that didn't happen only to get a bill for service that I never had. No resolution even with their supervisors. Don't sign up with Frontier for anything!
• Sheryl S

Frontier is a polarizing internet service provider. On the one hand, all Frontier internet plans are unlimited, reasonably priced, and available in many rural and metropolitan regions alike. On the other hand, the provider's DSL plans are plagued with reliability issues, and its customer support service is among the worst in the industry.

As such, we recommend Frontier DSL and fiber optic plans (there are no dedicated Frontier WiFi plans) only to those who live in areas where better-rated internet service providers don't operate.

What is Frontier fastest Internet speed?

With the Frontier Fiber 2 Gig fiber optic plan, you can enjoy download and upload speeds of up to 2,000 Mbps, which is so fast that you would have to try very hard to max out your internet connection.

What type of internet connection is Frontier?

Is Frontier owned by Verizon?

No, Frontier isn't owned by Verizon, but the internet service provider acquired some Verizon Communications' landline assets in 2009.

Is Frontier FiberOptic the same as FiOS?

Yes, Frontier FiberOptic used to be called Frontier FiOS or FiOS from Frontier.