As a company, CenturyLink had a lot of time to get to where it is today. Its roots can be traced to 1930, and the name CenturyLink has been with us since 2009. In 2020, CenturyLink changed its name to Lumen Technologies, but the company continues to use the CenturyLink brand for its internet services.

There are two main CenturyLink internet plans to choose from:


The DSL plan relies on existing telephone lines, so its availability is great, but the speeds it offers are decent at best. The fiber optic plan, on the other hand, uses dedicated fiber optic cables for much faster speeds and greater reliability. Unfortunately, the required fiber optic infrastructure is concentrated in urban areas, with rural towns seldom being connected.

The good news is that both CenturyLink DSL and fiber internet plans are priced very competitively. The Fiber Gigabit plan even comes with unlimited data, so you can take full advantage of the symmetrical 940 Mbps connection. The CenturyLink Internet DSL plan is limited to 1 TB of data per month, which feels about right considering that it’s nowhere near as fast as the fiber plan.

According to an FCC report, the DSL plan doesn’t always deliver the advertised speeds, whereas the fiber plan is fairly consistent. This is something we see often, and we consider it to be the nature of the beast when dealing with DSL internet.

Since the price difference between the two types of internet offered by CenturyLink is relatively small and the advantages of fiber internet are so great, we highly recommend all those who live in areas where CenturyLink fiber internet is available to go with it.

CenturyLink has a dedicated web page for small businesses, but there’s actually no difference between CenturyLink business internet and CenturyLink home internet. You always get to choose between the same no-contract plans. It’s worth noting that there are no CenturyLink WiFi plans, but al customers get a WiFi-enabled router anyway. 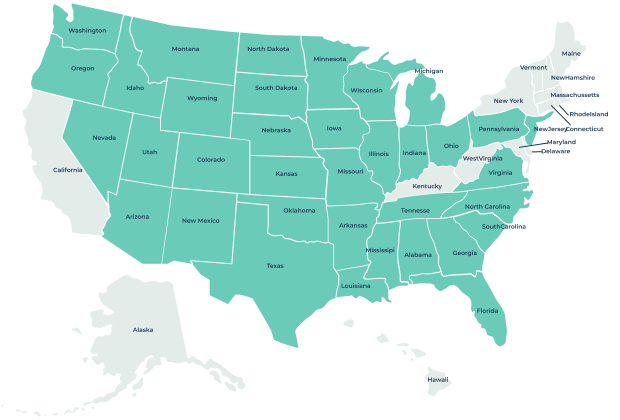 Unfortunately, the availability to CenturyLink fiber internet is limited to the following cities:

If you live in one of the 19 cities where CenturyLink fiber internet is available, then don’t hesitate to give it a try. The fiber optic plan is affordable, and you can switch to a different internet service provider at any time since there’s no contract to worry about.

CenturyLink is a consumer-friendly internet service provider because it doesn’t believe in contracts or early termination fees.

The only extra fees you should know about are for your router and installation. It costs $15.00 a month to rent a CenturyLink router, but you can also purchase it outright by paying $200 upfront.

The good news is that all modems offered by CenturyLink are pretty good, especially if you use a WiFi analyzer tool like NetSpot to install your modem in the optimal location. NetSpot can also help you avoid issues with wireless interference, which may happen when multiple WiFi networks share the same WiFi band and channel.

As far as the installation fee goes, CenturyLink charges new customers $59.99, but it’s easy to come across a promotion that brings the cost of installation down to zero.

We should also mention that all customers who enjoy the simplicity of the CenturyLink prepaid internet plan, which combines month-to-month pricing with no long-term contract, can manage their accounts online after completing enrollment in the My CenturyLink web service.

You can get in touch with CenturyLink’s customer service by:

The 2021 J.D. Power US Residential Internet Service Provider Satisfaction Study paints basically the same picture, with CenturyLink earning a score of 674 on a 1,000-point scale in the South region and 708 in the West. These scores place it below the industry average for the two regions, so there’s definitely plenty of room for improvement.

To better understand what CenturyLink customers like and dislike about the provider, we can take a look at CenturyLink internet reviews published on BroadBandNow, where CenturyLink is rated 3.6 out of 5.

Here's what some customers have to say about the provider :

We switched to CenturyLink and could not be happier. It is so much faster, has never cut out and had the best installation customer service. The price is also great.

Great appreciation to the tech who was incredibly personable & informative while assisting us connect our service today. He was very diligent & professional with his problem solving, having to address unique obstacles in our residence as well as our outside property. CenturyLink is very fortunate to have such a positive & capable representative. Thank you again!
• K Palmer

Because of how broad CenturyLink internet availability is, there are many people who want to know if CenturyLink internet plans are any good. The short answer is: yes, they are! Without paying too much money or locking yourself into a long contract, you can get a fast internet connection in 36 states.

Sure, CenturyLink fiber internet plans are available only in large cities, but that’s to be expected. The biggest reason to avoid CenturyLink is the lackluster customer support and perhaps the fact that the provider doesn’t offer basically any interesting bundling options.

Do you need a phone line for CenturyLink internet?

Is CenturyLink a good internet provider?

That depends on what you’re looking for. CenturyLink offers attractively-priced DSL and fiber internet plans, CenturyLink internet speeds and customer service are not as good as they should be.

Both CenturyLink DSL and fiber internet plans are fast enough for just about everything regular users do online, but real speeds are often slower than advertised speeds, so you should perform a CenturyLink internet speed test to confirm that you’re getting your money’s worth.

What is the highest internet speed CenturyLink offers?

The highest internet speed CenturyLink offers is 940 Mbps, and you can unlock it by purchasing the Fiber Gigabit plan.

Get NetSpot for Free
Wi-Fi Site Surveys, Analysis, Troubleshooting runs on a MacBook (macOS 10.10+) or any laptop (Windows 7/8/10) with a standard 802.11a/b/g/n/ac/ax wireless network adapter.
Get NetSpot