What Does WiFi Stand for and How It Works?

We have gotten used to WiFi networks being virtually everywhere, allowing us to conveniently connect to the internet from computers and mobile devices alike without physical cables and complicated setup procedures.
top choice
Get NetSpot

If you’ve ever used a WiFi analysis tool such as NetSpot, you probably also wondered what is WiFi and how does WiFi work, and that’s exactly what you’ll learn in this article.

Jump to...
What Is WiFi and What Does WiFi Stand for?
How Does WiFi Work?
Most Important WiFi Terminology
Conclusion

What Is WiFi and What Does WiFi Stand for?

WiFi is the name given to a family of wireless network protocols that allow modern electronic devices, such as smartphones, laptops, and various Internet of Things gadgets, to wirelessly connect to a WiFi-enabled router in order to reach the internet.

WiFi protocols are based on the IEEE 802.11 family of standards for local area networking, which are created and maintained by the Institute of Electrical and Electronics Engineers (IEEE) LAN/MAN Standards Committee (IEEE 802). The first WiFi protocol was released in 1997, and it provided up to 2 Mbit/s link speeds.

Since then, multiple WiFi generations have been released, each offering faster speeds than the previous one. For example, the latest generation, WiFi 6, provides up to 9608 Mbit/s link speeds, making it almost 5000-times faster than the first generation.

Even though over 3 billion WiFi-enabled devices are shipped globally each year, not many people actually know what WiFi stands for — or they think they know but actually don’t. That’s because it’s often believed that WiFi means “Wireless Fidelity,” but that’s actually not the case.

In reality, WiFi doesn’t stand for anything at all because it’s a commercial brand name created by the brand-consulting firm Interbrand, a world-leading brand consultancy with over 45 years of experience. Interbrand was hired by the non-profit Wi-Fi Alliance, an organization that certifies devices for WiFi interoperability, to come up with a better name than IEEE 802.11b Direct Sequence.

How Does WiFi Work?

Similar to the traditional transistor radio, WiFi networks transmit information over the air using radio waves, which are a type of electromagnetic radiation with wavelengths in the electromagnetic spectrum longer than infrared light.

WiFi radio waves typically have the frequency of either 2.4 gigahertz or 5.8 gigahertz. These two WiFi frequency bands are then subdivided into multiple channels, with each channel possibly being shared by many different networks.

When you download a file over a WiFi network, a device known as a wireless router first receives the data from the internet via your broadband internet connection and then converts it into radio waves. The wireless router then emits the radio waves to the surrounding area, and the wireless device that has initiated the download request captures them and decodes them.

To ensure optimal WiFi performance, network administrators often rely on WiFi analyzers such as NetSpot to visualize, manage, and troubleshoot WiFi connections. NetSpot can generate a comprehensive visual map of WiFi networks, highlight areas of signal weakness, and reveal potential causes of interference. In the current era of omnipresent WiFi networks, a tool like NetSpot is indispensable even when setting up a basic WiFi home network.

Even though NetSpot is used by professionals, it’s also suitable for home users who don’t have time to learn about the ins and outs of network administration yet still want to enjoy the WiFi speed they deserve and have paid for. NetSpot runs on any MacBook running macOS 10.10+ or any laptop with Windows 7/8/10/11.

Now that we’ve explained what WiFi stands for and provided you with a widely accepted WiFi definition, it’s time to take a closer look at some of the most important WiFi terminology. As you can probably imagine, we can only scratch the surface of the IEEE 802.11 standard here, but knowing the terms described below should be enough to help you make wise purchasing decisions when buying a new WiFi router or selecting a new internet provider.

The biggest difference between the two frequency bands is the fact that the 5 GHz signal is only about half the range of the 2.4 GHz signal.

What’s worse, it has more trouble penetrating walls and solid objects. On the other hand, the 5 GHz band is far less crowded than the 2.4 GHz band, which is a huge advantage in heavily populated urban areas where WiFi networks are virtually everywhere.

WiFi security protocols prevent unauthorized access or damage to computers using wireless networks. The most basic wireless security is Wired Equivalent Privacy (WEP). It was ratified in 1997 and declared deprecated in 2004 because of its security limitations. 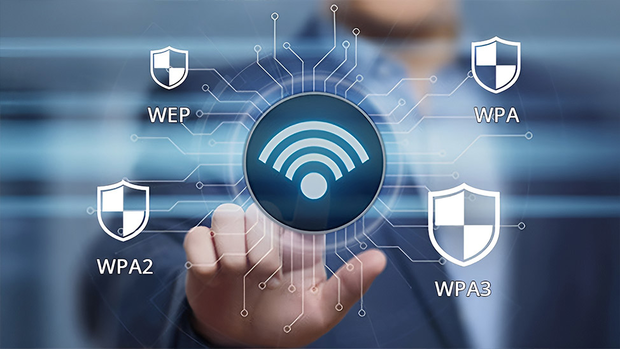 Understanding WiFi meaning allows you to navigate the vast sea of different technologies and communication protocols. It also makes it easier to use a WiFi analyzer such as NetSpot. With it, you can optimize your home network for maximum performance and solve all common WiFi problems, such as interference, dead spots, or poor signal strength.

You can download NetSpot for free from its official website and join the hundreds of thousands of satisfied users who have successfully optimized their WiFi networks without any expert knowledge thanks to NetSpot.

If you want to dive deeper into this Wi-Fi thing, check out the following articles about Wi-Fi security, the best apps for wireless networking, inflight WiFi, etc.
Travel into the World of Inflight WiFi
Learn more
Five Ways How to Get Free WiFi Anywhere
Learn more
WiFi direct - what it is and how it works
Learn more
Get NetSpot for Free
Wi-Fi Site Surveys, Analysis, Troubleshooting runs on a MacBook (macOS 10.10+) or any laptop (Windows 7/8/10/11) with a standard 802.11a/b/g/n/ac/ax wireless network adapter.
Get NetSpot