The best WiFi booster app for Windows is NetSpot, which can scan available WiFi networks and map out the weak points in the network.
top choice
Get NetSpot

Jump to...
WiFi Booster Software to Go Ever Further
Best Speed Booster
WiFi Boosting And Beyond

WiFi seems like magic to those who grew up in the era of modems and the earlier Ethernet connections. The idea that we can access the network with portable tablets, laptops, game consoles, and refrigerators is something out of old science fiction novels.

As good as it is, setting up a WiFI network can have some hazards. Those dead spots in the conference room where we can’t access the network during a presentation. Being unable to have our tablet reach the Internet while we’re trying to follow a recipe because the increased amount of metal in the room blocks the signal.

WiFi boosters extend the reach of the network in various ways. The most common methods are:

Using WiFi booster software can extend the reach of the network, but before we can start, we have to know where to deploy the extensions. This is where a WiFi booster application for Windows that can detect networks can come in handy. Using a notebook or similar portable device, we can move through the establishment and measure the signals for the WiFi network.

With that, here’s a list of helpful applications that can help map out and extend the WiFi network. Most of these applications work on Windows 7 through 10, so they’ll work on any modern computer.

choice #1
NetSpot
WiFi booster app runs on a MacBook (macOS 10.10+) or any laptop (Windows 7/8/10/11) with a standard 802.11a/b/g/n/ac/ax wireless network adapter.
NetSpot works as a WiFi booster application by detecting networks with its powerful scanning and mapping tools.

The free version allows the user to scan the WiFi networks within range. This lets the user move to one spot after another to measure: 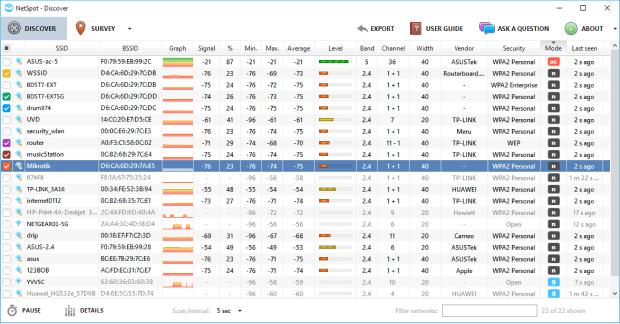 This information can be detected over different time periods. This allows the user to compare one series of measurements against another so they can see where the signal is best in physical space, and also see how the signal has changed over time in the same place. This way, if there’s some event such as someone using specific devices at certain times, we can start to isolate what those events are and how they affect the WiFi signal. 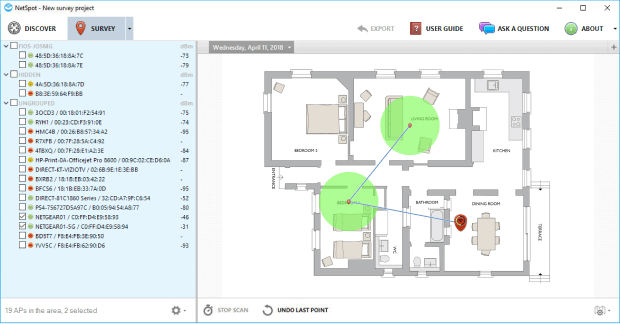 As WiFi networks are detected and analyzed through the building, NetSpot can display where the signals are strongest (shaded in red) and weakest (shaded in blue). By being able to see this on a map, we can see just how the network works best. For one heat map as an example: 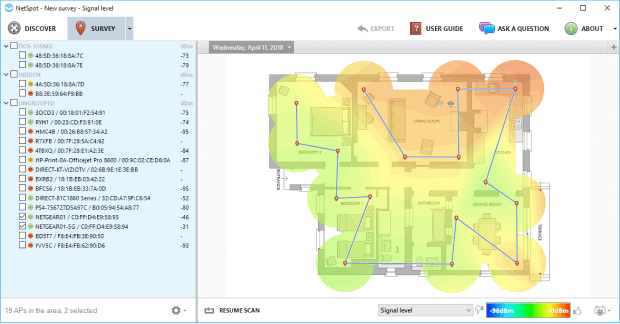 This map shows a very simple two-bedroom establishment with a kitchen and living room. Here, the WiFI device is located on the Eastern side of the building, where the signal is the strongest. On the Western side, looks like there’s a region in blue, where the signal barely reaches.

With NetSpot, we know if we add a WiFi booster app closer to the West, we can let the signal reach even further. If we had a smart TV or DVR in that area, with a booster app in the middle the WiFi signal can reach all the way out to let our devices connect perfectly.

Another nice thing about NetSpot is works with more than just Windows operating systems. Macintosh users can also benefit from this system, using the easy to use interface to gather information and build our heat maps.

NetSpot is the perfect WiFi booster software for Windows and Macintosh that can help map out exactly where to put in a WiFi router or extender.

When Internet Browsers first arrived on the market, one of the issues was waiting what seemed like forever to connect to web pages and download files. Internet Accelerator by Pointstone Software doesn’t make the signal between the computer and the Internet faster. What Internet Accelerator does is analyzes the settings in Windows, then makes various tweaks and adjustments in the registry and other spots to optimize efficiency.

Then it can monitor the network devices to demonstrate how the network adapter on the computer is working before and after the changes are made. Things such as packet size and priority are under the realm of Internet Accelerator to help squeeze every ounce of efficiency from the system. 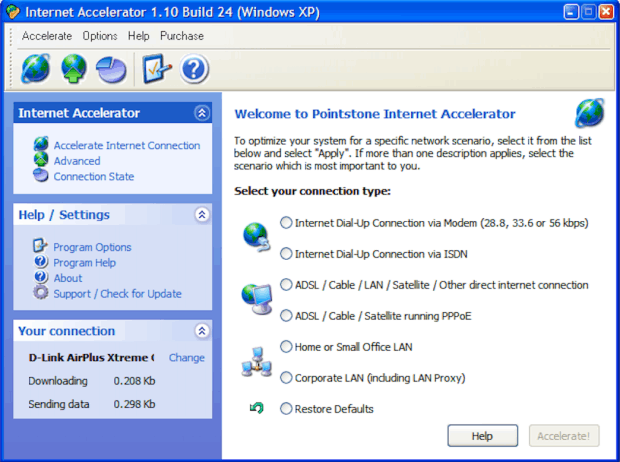 While it doesn’t extend the reach of the network, Internet Accelerator can perform some of the functions of a WiFi booster app by making the Windows computer more effective at transmitting information across the network.

Rather than extending the reach of one network, the alternative is to detect another one and use that one instead. There are plenty of free WiFi hotspots in existence, from coffee shops to business stores where people can work at. Even grocery stores and shopping malls have free WiFi available in places around the world.

Easy WiFi Radar looks for available hotspot networks and shows a map of where the closest ones are. Networks that are open and available are shown in green. This lets us go right to a spot where we can connect from. It’s not exactly a WiFi Booster app, but it’s an alternative when worst comes to worst.

Advanced Win Utilities is like the proverbial Swiss army knife. It does a ton of different things, but where it works as a WiFi Booster application for Windows by analyzing the various settings and making the tweaks to packet sizes and system priority for programs.

It can be used to scan the WiFi network to see what the signal strength is, so we can find the best place to put our WiFi router or extender devices.

Connectify presents an innovative way how you can boost your WiFi connection and enjoy greater coverage, improved signal strength, and better download and upload speeds. This WiFi booster app for Windows 10 is essentially a virtual router, allowing you to turn your laptop into a hotspot and share your internet connection with your smartphone, tablet, media player, e-reader, other laptops, or just about any other WiFi-enabled device.

Let’s say you have a weak WiFi router in your living room and don’t get a strong signal in all parts of your house or apartment. The situation isn’t too bad when you’re on your laptop because it has a fairly strong WiFi antenna, but connecting to the internet from your smartphone and other mobile devices can be a huge pain in the neck. 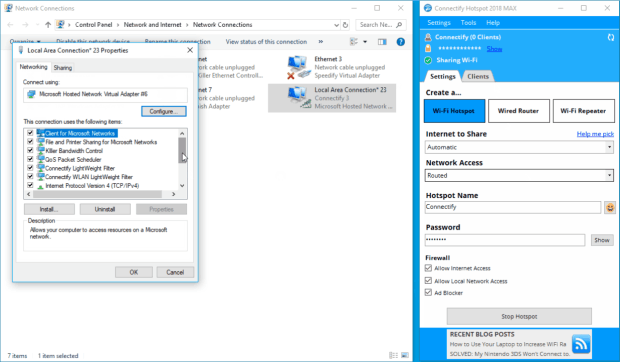 Instead of spending a lot of money on a new WiFi router, you can simply install Connectify on your laptop to use it as a WiFi signal booster by turning it into a virtual router. That way, even mobile devices with weaker antennas can achieve the same download and upload speeds as your laptop.

You can even physically connect your WiFi router and laptop with an Ethernet cable and create a second WiFi network with the same performance as the original one. In fact, the WiFi network created by Connectify may perform even better than the original one because Connectify includes a universal ad blocker that prevents annoying and unwanted ads from displaying on devices that join your hotspot.

Acrylic Wi-Fi Professional is a WiFi analyzer that can help you boost WiFi signal by identifying network problems, providing information about network performance, performing a detailed quality assessment, and otherwise improving the performance of your WiFi network.

Acrylic Wi-Fi Professional works with 802.11/a/b/g/n/ac/ax WiFi networks and is compatible with all recent versions of the Windows operating system.

Because it targets advanced users, professional WiFi network analysts and network administrators, it’s not as easy to use as NetSpot, but its features are equally impressive, including the ability to obtain detailed information about hidden WiFi networks, monitor mode to capture and analyze all wireless device traffic, and WiFi speed analysis, just to name a few of them.

To use Acrylic Wi-Fi Professional as a WiFi booster, it’s best to focus on WiFi channel interference, which happens when multiple WiFi networks in the same general area broadcast on the same or adjacent WiFi channel.

Acrylic Wi-Fi Professional can quickly discover all nearby WiFi networks and display their channels. All you need to do is configure your own WiFi network to use one of the less busy channels, preferably one that doesn’t overlap with any adjacent channels (in the 2.4 GHz band, 1, 6, and 11).

What’s nice about Acrylic Wi-Fi Professional is that provides information on how to improve your WiFi network performance straight in the application and allows you to export the collected information in a number of formats for further analysis, including HTML, CVS, and TXT.

The purpose of this Windows internet connection booster is to optimize and speed up your network connection and all your internet related activities by automatically tweaking various Windows settings. Most of these settings are quite obscure and known only to seasoned Windows administrators. Without a tool like SpeedConnect Internet Accelerator, you would need to use a registry editor to change them, which is fairly risky unless you know exactly what you’re doing. 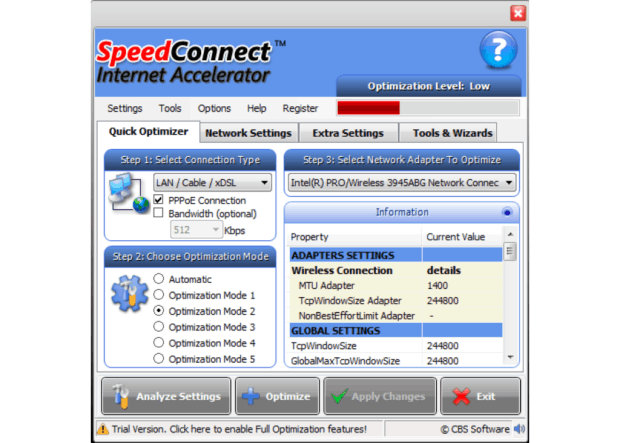 The easiest way how to get started with SpeedConnect Internet Accelerator is to use the SpeedConnect optimization wizard to identify your internet connection and automatically find the best settings. But you can also manually change just about every network setting there is, including maximum transmission unit, TCP receive window size, maximum segment size, time to live, host resolution priority, DNS cache parameters, or quality and type of service settings.

SpeedConnect Internet Accelerator has been around for a really long time, and its developers have used the time to improve its performance and polish its features. Yes, its user interface is rather outdated, but it serves its purpose and doesn’t take much effort to get used to.

Even the best WiFi signal booster app will get you only so far if there are unfixed problems preventing you from enjoying your WiFi internet connection to its full potential. Such problems may range from bad internet access settings to misconfigured host files to problems with your web browser and more. 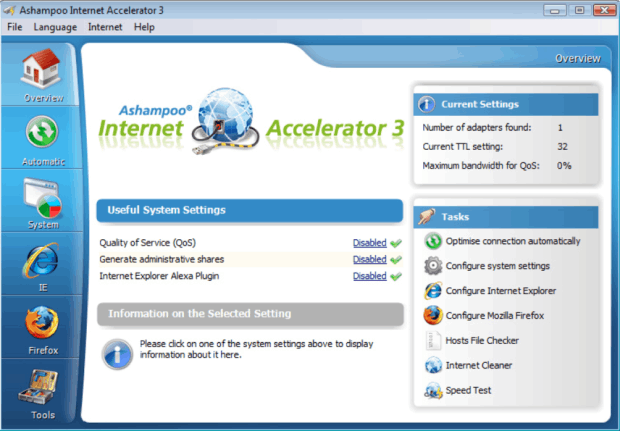 Fortunately, there’s an alternative to both time-consuming manual troubleshooting and expensive professional repair services: Ashampoo Internet Accelerator 3. This WiFi booster app analyzes your computer and optimizes all the relevant settings with a single click, and it includes an Internet connection speed test tool so you can test your performance directly.

Ashampoo Internet Accelerator 3 can boost and configure Internet Explorer and Firefox, quickly delete your complete surfing trail, make sure spyware and other malicious programs don’t redirect you to fake and dangerous sites, and interactively check some advanced parameters on your live connection to work out the best settings. All you need to do is let the software application do its job.

WiFi Boosting And Beyond

Before any good project can be started, we need information. The best way to get information on making our WiFi networks work is with NetSpot. Get informed. Get the knowledge you need, and get NetSpot to make the WiFi network work best for you.

If you want to get more information about Wi-Fi, check out the following articles about Wi-Fi routers, the best apps for wireless networking, WiFi signal, etc.
Try out the best WiFi monitoring software
Learn more
Check out the list of Top 3 best apps for Wi-Fi troubleshooting
Learn more
Best WiFi analyzer Windows apps in 2022
Learn more
Get NetSpot for Free
Wi-Fi Site Surveys, Analysis, Troubleshooting runs on a MacBook (macOS 10.10+) or any laptop (Windows 7/8/10/11) with a standard 802.11a/b/g/n/ac/ax wireless network adapter.
Get NetSpot