WiFi Testers: Everything You Need to Know

Do you know how to perform a WiFi test? Don’t worry if you don’t: you’ll learn everything you need to know about WiFi testing using WiFi tester apps in this article.

Why Is It Necessary to Test WiFi Signal and When Do You Need to Test It?

If you think that WiFi testing is something that only professional IT administrators and employees of Internet services providers do, think again. These days, even regular home users test WiFi signal strength to optimize their home WiFi coverage and achieve the fastest possible Internet speeds.

Why has WiFi testing and WiFi tester apps suddenly become so sought after? Because virtually everyone now has at least one mobile device that needs to be connected to the Internet all the time to function properly. In densely populated urban areas, thousands and thousands of devices often compete for a handful of wireless networks, which often run on the same channel, leading to wireless congestions and very poor experience for everyone involved.

But the situation isn’t much better even outside densely populated urban areas. Home users often struggle the most to find a reliable wireless signal because Internet service providers rent their customers budget routers with underwhelming coverage and even more disappointing default security settings.

In fact, it’s not uncommon to see rented routers have such bad security defaults that anyone who is familiar with basic wireless hacking tools can gain access to the wireless network broadcasted by the router and steal Internet bandwidth, or even private information, such as passwords and personal conversations.

What Is the Best Way to Test WiFi Signal Strength?

When testing a wireless network to improve signal strength, there are certain essential parameters that you need to pay attention to.

Considering that there are now more than 300,000 new malware files detected every day around the world, many of which target poorly secured wireless networks, we would say that wireless security is the best place to start.

A good WiFi test tool should tell you which type of encryption method a wireless network is secured with. The most common types of wireless security are Wired Equivalent Privacy (WEP) and Wi-Fi Protected Access (WPA). WEP is older than WPA, and it is now considered to be obsolete and insufficiently secure.

As such, you should choose WPA whenever possible. If your router doesn’t support the WPA encryption method, consider upgrading to a newer model that can provide sufficient security.

After security, the second most important parameter that you need to pay attention to is the channel the network is broadcasted on. In North America, the 2.4 GHz range is divided into 11 channels, with a minor overlap between adjacent channels. For best performance, it’s necessary to avoid overused channels and stick to those that don’t see much traffic.

Most WiFi tester apps make it possible to test the WiFi signal channel configuration of nearby wireless networks, and some can even visualize it on a graph. Once you see which channels are used the most, your job is to pick one that’s used the least. If you don’t feel experienced enough to decide which channel is the most suitable by yourself, download and use a WiFi tester app that automatically suggests the optimal channel based on gathered data.

Finally, you may also want to analyze network coverage and create a signal strength heat map to highlight all signal weak spots. This is something that only the best WiFi tester apps can do, so don’t expect any WiFi test online to have this functionality.


What Are the Best WiFi Tester Apps?

We understand that WiFi testing may sound a little daunting at first, but we guarantee that the three best WiFi tester apps described below can make it seem incredibly simple.

NetSpot is arguably the best WiFi tester app ever created, and it’s certainly the favorite WiFi tester app of hundreds of thousands of professional and home users alike, who all appreciate its modern user interface, complex features, great customer support, and attractive price. NetSpot has two distinct modes of operation: Discover and Survey.

The Discover mode creates an instant snapshot of nearby wireless networks and gathers all available information about them. The Survey mode, on the other hand, allows for the creation of in-depth wireless site surveys to visualize where exactly is the signal strongest and where it is the weakest. 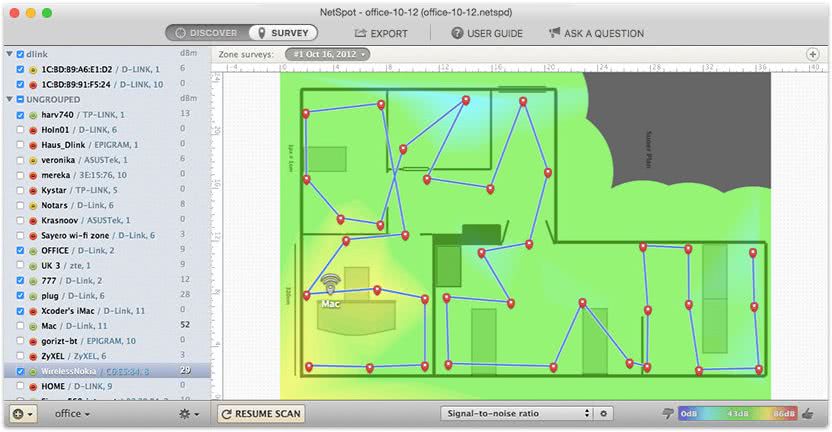 With NetSpot, you don’t need to be an expert to gain enough insight into the state of your wireless network to see where the problem is and understand how you can solve it. 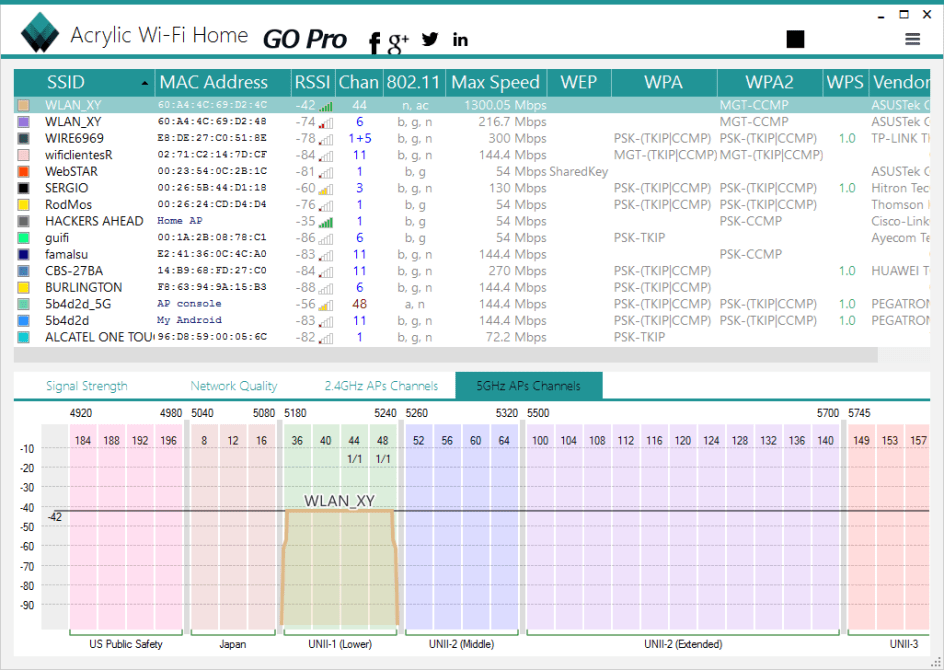 If you’re willing to invest some time into learning how to use this free WiFi tester app, you may even consider eventually upgrading to the Pro version or purchase the Heatmaps add-on to gain an even deeper understanding of wireless networks around you.

WiFi Analyzer is the simplest WiFi tester app on this list, and it’s also the easiest to install because you can download it straight from the Windows Store. The app can gather basic information about nearby wireless networks and help you find the best channel to broadcast on, but that’s where its capabilities end. 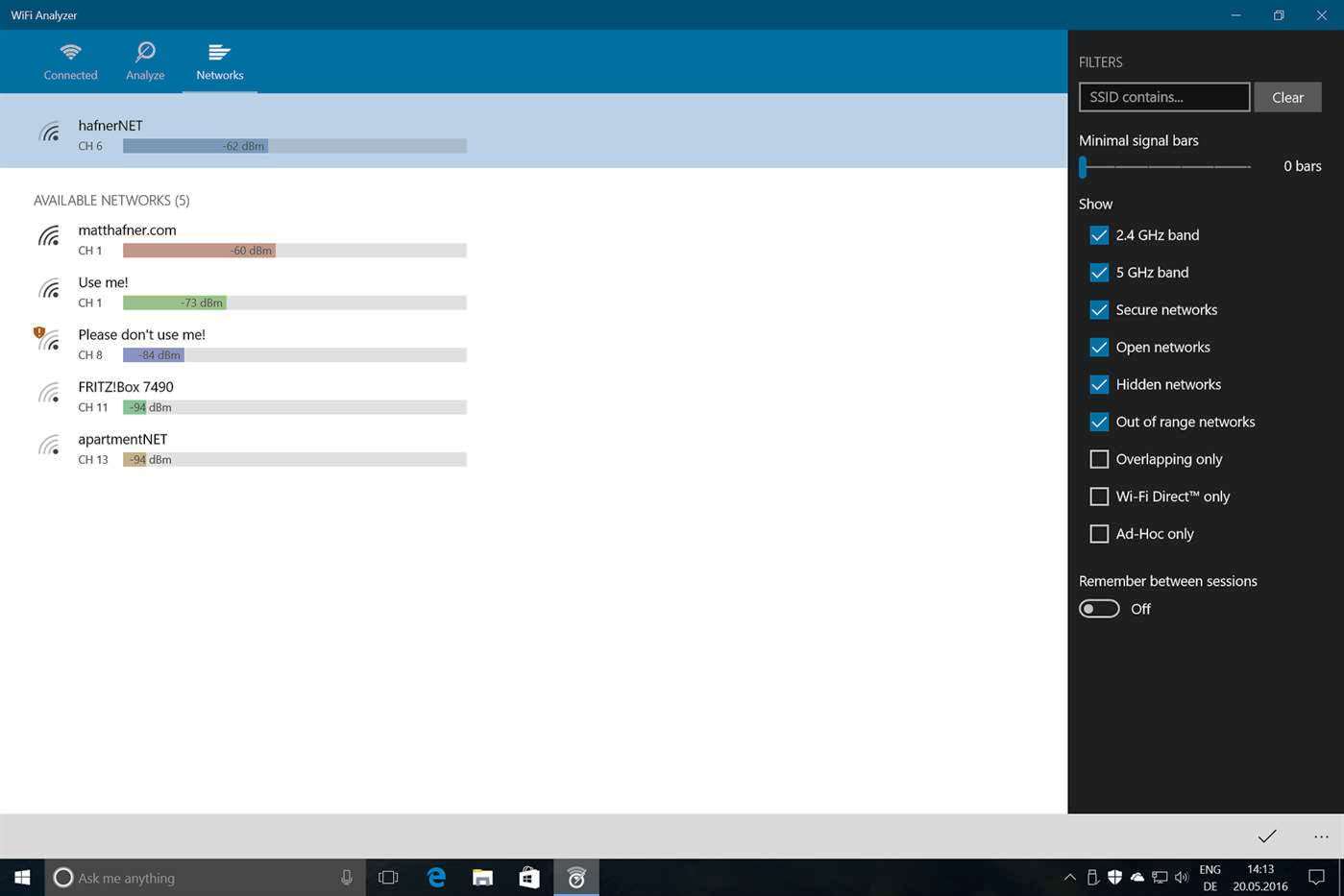 Because WiFi Analyzer is a modern Windows app, you can also run it on mobile devices with the Windows Mobile operating system, which is far more convenient than always carrying a heavy laptop around.