In this RCN internet review, we analyze everything you need to know to decide if any of the available RCN internet plans is worth your money.
top choice
Get NetSpot

This cable television company was founded in 1993 as the first provider of bundled telephone, cable television, and internet service in the United States. RCN’s service area has remained laser-focused on big metropolitan cities, whose residents appreciate the company’s no-contract internet plans, which give them the flexibility to relocate and upgrade or downgrade their internet connection based on their current needs.

Discussing RCN internet plans isn’t easy because not all plans are available across all areas serviced by the company. What’s more, how much available plans cost varies from location to location.

To give you at least some idea of what you can expect, let’s take a closer look at RCN internet plans in Chicago:

As you can see, even the most expensive RCN internet plan in one of the costlier locations serviced by RCN is quite affordable, and the cheaper plans are a true bargain.

These are introductory prices we’re talking about, mind you, and they include a $5 discount for 12 months with ebill & autopay. They also exclude surcharges and fees (more about them later in this RCN internet review). What’s important, however, is that you don’t have to sign a contract regardless of which plan you choose, so you can theoretically keep taking advantage of the introductory prices indefinitely.

All plans are unlimited, so your RCN internet speed is guaranteed to remain constant regardless of how much data you download each month.

If you’re someone who uses the internet only for regular office work or casual web browsing and lightweight steaming, then the less expensive plan should be able to meet your needs without any problems. Families and heavy users should consider the mid-range plan, while the top-of-the-range gigabit internet plan is perfect for those who live on the internet and download gigabytes of data every day.

RCN internet plans are available in the following regions:

As you can see, RCN internet availability isn’t the greatest, and it’s limited to major metropolitan areas. 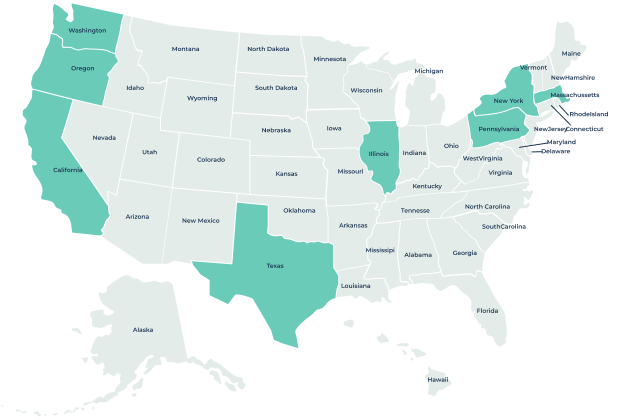 If you live in a location where RCN internet is available, then you should also consider the coverage of the provided RCN Wi-Fi router because RCN provides its customers the option to skip the router fee altogether by allowing them to use their own equipment. Alternatively, customers can upgrade to Astound’s enhanced Whole Home Wi-Fi or Pro-Gaming Wi-Fi router.

The Whole Home Wi-Fi option creates a mesh network using multiple eero routers, blanketing your home in a pervasive Wi-Fi network that you can conveniently manage using a modern smartphone app. This optional add-on starts at around $10 a month, and the price depends on how many eero you rent.

The Pro-Gaming Wi-Fi router is actually the well-rated Netgear Nighthawk XR1000, which features WiFi 6 and the latest DumaOS 3.0 operating system. It costs $12.95 per month to add the gaming router to your RCN plan, which is a pretty decent deal considering that the router retails for $469.98.

Customers who don’t see themselves paying for RCN internet for more than the initial 12 months during which discounted prices apply can really save a lot of money by renting their equipment instead of buying it.

As powerful and capable as the mesh system and the Pro-Gaming Wi-Fi router are, they still need to be installed and configured correctly to deliver peak performance. If you plan on setting up your RCN internet yourself, then you should equip yourself with a professional app for wireless site surveys, Wi-Fi analysis, and troubleshooting, such as NetSpot.

With NetSpot, you can effortlessly visualize your wireless coverage on a map to reveal all areas of signal weakness and determine a better place for your router. You can also see the configuration of other Wi-Fi networks that are present in your area and use this information to prevent problems with signal interference.

Just because RCN internet plans don’t come with a contract doesn’t mean there aren’t some potentially surprise fees you should know about.

As we’ve already mentioned, the introductory price is locked down for only the first 12 months. If you don’t want to pay more, you can cancel without any early termination fees before the introductory period is over.

Then there are the already described equipment rental fees, which are entirely optional but may actually make financial sense in some cases, especially if you’re happy with the available RCN routers and RCN Wi-Fi mesh equipment.

RCN charges an installation fee of $49.99 and an activation fee of $9.99. The good news is that you can avoid paying these fees by taking advantage of one of RCN’s free installation deals, which are fairly easy to come by.

RCN plans can be bundled with Astound TV for easy access to your favorite streaming apps, shows, news, movies, and sports. RCN’s TV plans range anywhere from $20 to $40 for a basic package.

You can get in touch with RCN’s customer service by:

Unfortunately, RCN doesn’t have a particularly well-rated customer service. In its recent customer satisfaction report, HighSpeedInternet.com rated it 7th out of 12 ISPs overall.

Why? Because it can be difficult to reach a real person, and there’s also the fact that RCN charges a $54.95 service call fee.

Here are some examples of what RCN customers have to say about the service on BroadBandNow:


I am not sure of everyone else's reviews here but RCN is the best by far. I have never had an issue with speed, service, customer service, or price. When my promotional period was over, I called and they extended it without me even asking. An amazing company in my opinion.
• Brian Mccann

Internet is ok, but not super fast. I was able to handle two laptops downloading movies etc. We have the 'basic' TV package — 40 channels of shopping, PBS and HBO. Not a good deal.

Astound Broadband powered by RCN is an affordable cable internet service that’s available in a handful of big metropolitan areas. If you live in an area where RCN internet plans are available, then there’s nothing stopping you from giving them a try because you don’t have to sign a contract and can rent capable Wi-Fi equipment for not much money.

Independent RCN speed tests have confirmed the service to be reliable and consistent. Of course, to enjoy reliable and consistent access to the internet as an RCN customer, you have to install your router correctly, and that’s something a professional app for wireless site surveys, Wi-Fi analysis, and troubleshooting, such as NetSpot, can help you with.